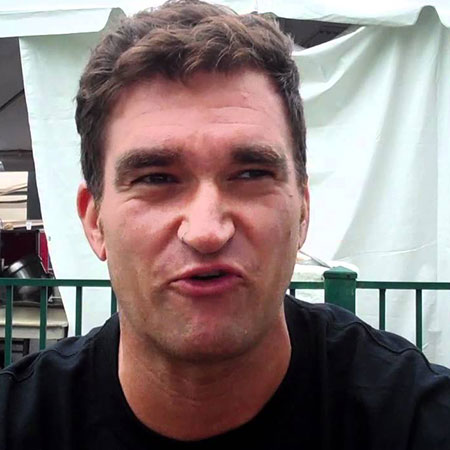 Jordan Pundik is an American musician and songwriter. He is also a founding member of the Floridian rock band New Founder Glory where he is a lead vocalist. He was also a guitarist of the now defunct band Side-Project, The International Superheroes of Hardcore where he performed under the pseudonym of "Chugga Chugga."

Jordan Pundik was born on October 12, 1979, as Jordan Izaac Pundik in Englewood, New Jersey, the United States under the zodiac sign of Libra. He shows the traits of his zodiac signs like kind, gentle and lovers of beauty, harmony, and peace. He was born to father Carlos Pundik and mother Maureen Pundik. Jordan has two siblings, brother Daniel Pundik and sister Edra Pundik.

When Jordan was just age of 3, his family moved to Pompano Beach, Florida where he spent his childhood and completed his school education. Jordan learned to play guitar when he was 15 years old. He graduated from Marjory Stoneman Douglas High School.

Jordan Pundik was interested in music from his early childhood days and his official career in music started after he completed his graduation. He started his career in a band after he founded New Found Glory back in summer of 1997 after he met Steven Klein at Marjory Stoneman Douglas High School. The duo named their band name when Jordan and Khein were working in Red Lobster.

Ian Grushka was recruited as their first band member who played ba s s and later Joe Marino aka Taco Joe joined the group as a drummer. After a short period of time, Chad Gilbert joined the band as a lead guitar who was a former vocalist of Shai Hulud.

They used to practice their songs on the garage and in 1997 they released their debut EP It’s All About The Girls and in 1999, their debut song Nothing Gold Can Stay was released.

In 2000, their album topped the US Heatseekers chart. The band received its greatest achievement after its 2009 album Without a Fighting was ranked at #1 on the US Indie Chart.

Jordan has also worked with several collaborated with many artists; he has voiced on the track Kings of Hollywood and You're Not Alone on Before Everything and After in 2003.

Jordon has even given backup vocals for the songs like Cat Like Thief by Box Car Racer along with Tim Armstrong.

In 2004, he appeared on the Breakdance Vietnam song Graves of Mistakes from the album Memories of Better Days. Jordan even collaborated with Paramore's Hayley Williams and Relient K's Ethan Luck for a punk rock cover of The Bed Intruder Song.

Jordan Pundik's net worth is estimated to be around $4 million. As a musician and songwriter, he has earned a decent amount of money. His two songs have hit the #1 place on US Heatseekers chart as well as on US Indie Chart so we can predict Pundik has earned a whopping amount of money from these songs.

Some of the most loved songs of his band are Hit or Miss (Waiting Too Long), My Friends Over You, Head on Collision, and All Downhill from Here.

Some of his Discography are :

Jordan Pundik is a married man, he got married to Mandy Gerling on May 23, 2009. They are currently living a happy married life together and they welcomed their first son a year later in 2010.

Three years their first son was born, they welcomed their second child in 2013. It was not his first marriage as he was previously married to his longtime girlfriend Stacy Greimsmann. They were in a relationship for a long time before they tied the knot on September 5, 2005.

But their relationship as husband and wife didn’t last for long as they started facing several problems with each other. Their mutual dispute ultimately led the couple to end their relationship in divorce-they got divorced on February 15, 2007.

He was a big fan of rock band Nirvana and Green Day which inspired him to pursue a career in music. Billie Joe Armstrong, the main vocalist of Green day and Kurt Cobain the vocalist of Nirvana were his great inspirations as a musician.

As video below, Jordan Pundik and Chad Gilbert talk about their tattoo stories.