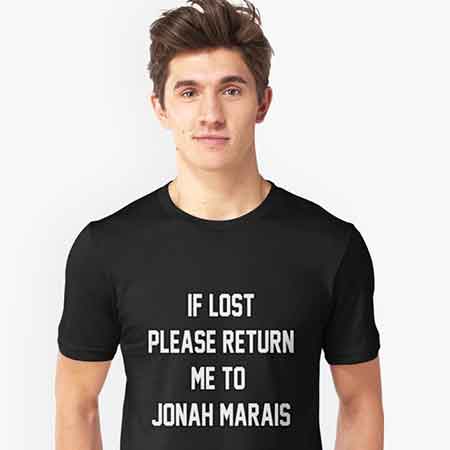 The singer and social media star, Jonah Marais initially rose to fame after posting on YouNow, which led him being booked at big social media events.  He is, however, mostly known as one of the band members of  Why Don't We. The band released their first single, "Taking You," in October 2016. Prior he was a solo artist and released the album titled When the Daylight's Gone.

Jonah Marais was born on June 16, 1998, in Stillwater, Minnesota, the USA to Tim Marais, a musician, and  Carrie Marais, a midwife. His birth sign is Gemini which defines his personality as curious, adaptable and has the ability to learn quickly and exchange ideas.

He has three siblings sisters, Esther Marais, and Svea Marais and brother Zebulon Marais. He has yet to disclose his college and school. As far as his nationality and ethnicity are concerned, he is White American.

Marais rose to fame after posting videos on YouNow, a live streaming video chat site, soon he became an internet sensation. In 2014, he toured with social media superstars Nash Grier and Cameron Dallas across America, performing and meeting fans from cities, such as Los Angeles, Memphis, and Dallas.

Then Marais started his singing career and released his first single, "I Meant it" in 2015 which received 4.9 stars on iTunes. Followed by Night Changes’ and ‘Next Ex-Girlfriend’.  He released his first EP When the Daylight's Gone in 2016 which was highly appreciated by critics and audiences.

In 2016, Marais joined the pop band,  Why Don't We along with four other band members, Corbyn Besson, Daniel Seave, Jack Avery and Zach Herron.

Jonah Marais' Net Worth And Earnings

Jonah Marais is a rising singing sensation who garnered a huge fan following in short span of his musical career. As per some online sources, his estimated net worth is $1 million. Apart from that, he earns a good sum of the amount from concerts and stage performances.

He earns $20 - $317 per month and $238 - $3.8K per year from his self-titled YouTube channel, Jonahmarais. The artist also has a mega fan following on her Instagram account with over 2 million followers. It plays a major role in his earnings.

Jonah Marais is possibly single and not dating anyone as of 2019, but previously, he dated the youngest member of the group “Cimorelli”, Dani Cimorelli in August 2014. However, their relationship lasted for only 2 months.

In October 2016, when Dani tagged Marais and asked if he got a new number to which he instantly replied: "I got a new number and I will text you". After this cute banter, many of their fans speculate the couple is back together but both of them hasn't commented about it.

Marais has more than 1.6 million+ followers on his Instagram where he updates his fans about his personal and professional events.

He shares a good bonding with his bandmate, Corbyn Besson. He loves to play baseball. He has a tattoo on his right hand.

Marais also owns a self-titled  YouTube channel, Jonahmarais and as of October 2018, he has 122k+ subscribers with 1.8 million views but he has not been active on the channel since 2016.

Check out the interview of Jonah Marais,