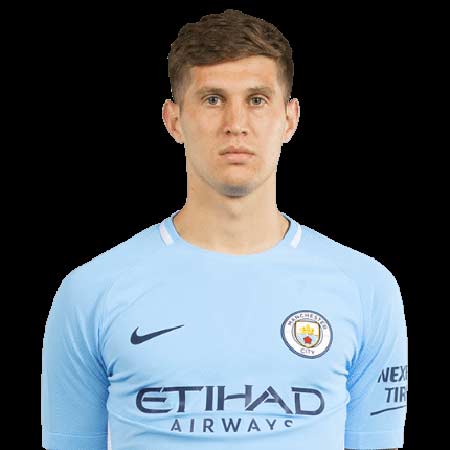 The world’s second most expensive defender John Stones came to limelight for his technical ability and physical presence. He is also regarded as one of the best ball-playing central defenders. He is mostly known for his defensive skills, the range of passing, and vision on the pitch. The softly-spoken defender can also play as a right-back who currently plays for Premier League giant Manchester City and English national team. He has been listed on the 23 man squad of FIFA World Cup 2018. His three-year association from 2013-16 with the club Everton ended with scoring only one goal in 77-matches.

John Stones was born in Barnsley, United Kingdom, on 28 May 1994, to Peter Stones and Janet Stones. He belongs to British nationality and as far as his ethnicity is concerned, he is Caucasian.

At the tender age of seven, Stones joined Barnsley youth academy where he gradually honed his skills until he signed his professional contract with the club in the year 2011. On 17 March 2012, he made his debut and netted his only one goal for the club.

After his three-year association with Barnsley, John Stones made his move to English football club Everton signing a five-and-a-half-year contract for a reported transfer fee of £3 million. He made his Premier League debut in a 1–1 draw match against Stoke City at the Britannia Stadium on 1 January 2014.

In the same year, Stones signed a new five-year contract which was believed to be worth around £30,000 a week to play for the club until 2019. The footballer netted his first goal for the club in a 3–0 home victory over Manchester United on 26 April 2015.

He soon became one of the most wanted players, and the English giant Chelsea offered three bids for £20 million, £26 million and £30 million for the player, but Everton canceled the proposal.

On 9 August 2016, Stones became the world's second most expensive defender in the football history when the English top flighted club Manchester City gave him a staggering amount of £47.5 million which also includes a potential extra £2.5 million in add-ons.

After representing England at U-19 level, Stones played his first game for England U20 team on June 16, 2013 playing in a warm-up game against Uruguay which ended in a 3–0 win. He was also a member of U-21 England team and made his debut playing the entire 90 minutes in a 6–0 win against Scotland.

Stones made his international debut for the England national football in a 3–0 friendly victory over Peru on  3 September 2014. He played his first competitive match for his team in a 2–0 victory away to Switzerland during the UEFA Ero 2016 qualification match.

John Stones' Net Worth And Salary

John Stones' tremendous amount of contract with several renowned clubs and endorsements with big companies helped him to accumulate a huge net worth of around $2 million, for his age.

The footballer currently plays as a center back for Manchester City and earns around £100,000 ($134,121.10), in a week. He bought his fortress for £3.5million ($4,693,766), in February 2017 along with girlfriend Millie Savage. The stunning rural property is located near Knutsford in Cheshire, which boasts six-bedroom, indoor swimming pool, and landscaped gardens.

Stones is also the owner of Mini Copper Classic which is worth around $19,000.

John Stones is in a longterm relationship with Millie Savage. He started dating Savage when he was just 12-year-old. The player, however, was rumored to be having an affair with another girl named Jessica Peaty.

Jessica claimed that she had an affair with England ace Stones. Talking about her relationship with Stones, she said,

“I definitely had feelings for him. It felt like we were connecting, speaking constantly and sharing everyday life. We spoke twice a day, every single day. We saw each other once a week at least since we met. That was how intense it was.”

It was also reported that the alleged couple was spotted for many times at his £900-a-night suite at the Lowry Hotel in Salford, but the rumors were never confirmed.

Here is the video of John Stones' defensive skills.