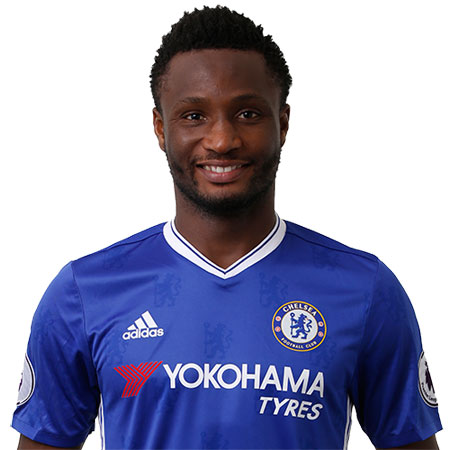 The Nigerian professional footballer John Obi Mikel is currently playing for Chinese Club Tianjin TEDA in the Chinese Super League as a midfielder. He is also part of Nigerian national team, made debut for his country on August 17, 2005.

Mikel won the Silver Ball following his excellent performance in the FIFA World Youth Championship, in 2005. He was also named African Young Player of the Year in 2005 and 06.

Mikel scored his first international goal at the beginning of 2006 against Egypt. He played as a midfielder for more than a decade with the English Premier League club Chelsea and made 249 appearances playing for the club.

John Obi Mikel was born John Michael Nchekwube Obinna on April 22, 1987, in Jos, Nigeria. He is the son of Michael Obi, owner of an inter-state transport company in Jos. He is also a former member of the Igbo ethnic group Nchekwube.

Mikel holds Nigerian nationality and regarding his ethnicity, he belongs to Igbo ethnic group. He made his official football debut when he was just 12 after being picked from more than 3,000 young players to play in Pepsi Football Academy.

Mikel’s talent acceded all expectations of the scouts which later helped him to play for top-flight club Plateau United. After making headlines at the FIFA Under-7 World Championship, he took training at South Africa Club Ajax Cape Town. And then he joined the Oslo-based club LyFootballll in Norway.

The Nigerian Football Association mistakenly submitted “Michael” as “Mikel” for the 2003 FIFA Under-17 World Championship in Finland. Following his participation in the tournament, he decided to keep the name. He played for his country Nigeria at the FIFA World Youth Championship, in the summer of 2005.

Though they played excellently until their team reached the final, they lost in the finals against Argentina. Following his impressive performance in the tournament, he was awarded the Silver Ball and became the second-best player throughout the tournament.

After Mikel decided to join United, Norway claimed that the footballer received numerous grim phone calls from unknown sources. Thus he started living in a safe hotel with full security. He went missing during Norwegian Cup, on 11 May 2005. Following his disappearance, there were a lot of headlines going on about his alleged kidnapping. And later Manchester United's a s sistant manager Carlos Queiroz accused Chelsea of his alleged kidnapping.

Later, it was revealed that he was never kidnapped in the first place. Turns out he traveled to London with his agent John Shittu. Sky Sports News reported that Mikel had been pressured into making the deal with United without his agent's presence and in an interview with the British media, he revealed his wish to join the London based club, Chelsea.

Following the incident, Mikel failed to return to his old club and because of that club, Lyn lodged a complaint to FIFA on August 12, 2005. After the complaint, Mikel complied with the FIFA and returned to his former club.

In order to resolve the controversy, FIFA stepped in. On June 2, 2006, Chelsea, Manchester United and Lyn came to a final settlement. In the settlement, Mikel’s registration is to be transferred to Chelsea. Whereas Chelsea will also have to pay £12 million upon the finalization of the contract to United and 4 million to Lyn.

On 19 July 2006, Chelsea gave him a work permit after they completed 16 million signing in June 2006. After that, Lyn Director Morgan Anderson was also sentenced to a year in prison by the Oslo court due to fraud and making false accusations.

Mikel made his Chelsea debut on 12th September 2006 playing against Bulgarian club Levski Sofia in the UEFA Champion League. Though he received a lot of public attention for his mind-blowing performance in the match, he was fined on three separate occasions by the club for turning up late to training during the match against Reading on October 2006.

Mikel scored his first goal for the club in their 6-1 win against Macclesfield Town at the beginning of 2007. In the same year of September, he was again sent-off for the third time for a tackle against Manchester United defender Patrice Evra.

Mikel performed admirably throughout the 2008-09 season and was nominated for the club player as well as young player of the season. On July 22, 2009, Chelsea signed a new five-year contract with Mikel. In May 2010, he was awarded winner's medal for winning Premier League and FA Cup, first ever league-cup double-winning squad.

During the new 2010-11 Premier League, Mikel was the preferred option in the defensive midfield as the versatile team member Michael Essien was not able to play the full season because of his knee injuries. He played the full 120 minutes in a 1-1 draw against Bayern Munich, in the 2012 Champions League Final.

Chelsea eventually won the tournament defeating Munich in the penalty shootout. In November 2012, Mikel alongside Didier Drogba was named in the list for the African Footballer of the Year. After a few days, he was banned for three matches and fined £60,000 for his misbehavior with referee Mark Clattenburg.

Mikel scored his first-ever Premier League goal in Chelsea’s 2-0 victory over Fulham. The footballer made his 200 appearances in Premier League for Chelsea on February 3, 2014, coming on as a late substitute in a 1-0 win against Manchester City.

On November 4, 2014, Chelsea made an announcement that they won’t renew his contract after the 2016-17 season end. On January 6, 2017, he made his free transfer to Chinese club Tianjin TEDA.

After representing the Nigeria U20 team at the 2005 FIFA World Youth Championship, Mikel received the Silver Ball for the becoming the second-best player at the tournament behind Barcelona's forward Lionel Messi. On August 17, 2005, he made his Nigeria senior team debut coming as a second-half substitute in a 1-0 friendly victory over Libya.

Mikel scored his first international goal playing against Egypt, on January 27, 2006. Due to injury, he was ruled out from FIFA World Cup in South Africa, on June 5, 2010. He made his FIFA Wolrd Cup debut playing against Iran during the 2014 tournament in Brazil.

Mikel scored a goal for his country in a 3-1 victory over Algeria in a 2018 FIFA World Cup qualification match. He registered his first ever Olympic goal in a 2-0 victory against Denmark, on August 13, 2016.

According to the Celebrity net worth, Mikel has an estimated a net worth of around $25 million, as of 2018. It is reported that his weekly salary is about $140,000 Euros which amounts to $6 million annually, in 2018.

During his long career with Chelsea, Mikel earned about £80,000 in a week. Mikel also owns an exotic fortress in the United Kingdom which is worth around $6 million. The home features a swimming pool and sports room as well.

The footballer also makes a hefty amount of cash from his endorsement deals with a number of multinational companies, including Samsung, Nigerian Breweries Plc, and PEPSI. It is reported by the African Football.com that he made around $4 million from endorsement in 2017.

The midfielder of Tianjin TEDA, Mikel is in a long relationship with his Russian girlfriend Olga Diyachenko since 2013. The couple first met in London, in early 2013 while she was living with her father who had a chain’s businesses at that time. The couple is still going pretty strong even at present without any break-up rumors.

Mikel is also a dad to a six-year-old son and three-year daughter from a short-lived relationship with different women. After becoming a dad, he purchased a 500,000 detached property in his home country for his son and the boy’s mother. Whereas his daughter and the girl’s 25-year-old mother resides in South England.

Here is the must know 10 real facts about Mikel,