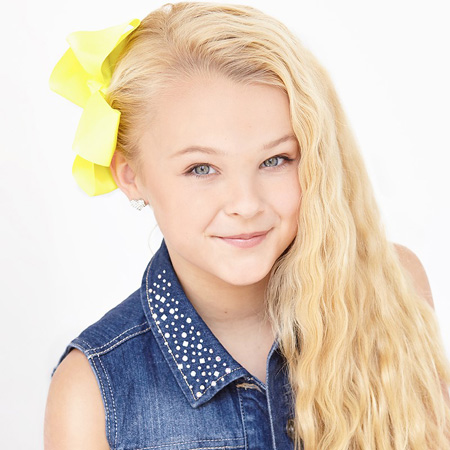 Joelle Joanie, known by her fame name, JoJo Siwa is an American singer, dancer, actress and YouTube personality, recognized for her appearance on two seasons of Dance Moms with her mother, Jessalynn Siwa.

JoJo Siwa was born on 19 May 2003 in Omaha, Nebraska, United States. Siwa was born to Jessalynn Siwa and grew up in Omaha Nebraska.

JoJo has a brother named Jayden Siwa, who is recognized as a reality celebrity dancer. He is home-schooled, and he started dancing from her early age of two. He later took dance training in her mother's studio.

JoJo Siwa made her appearance in the second season of Abby's Ultimate Dance competition along with her mother. They both were disliked by most of the contestants on the show. JoJo and her mother got eliminated in the ninth week of the show.

After Siwa gave an audition in Orlando, she made her appearance on a reality show called Dance Moms in the fourth season.

She was also cast in Abby Lee Miller's, ALDC dance competition team after she was chosen to the team in 2015. JoJo and her mother were invited to join Abby Lee Dance Company elite team after the first season at Dance Moms.

Soon, JoJo will be featuring on the Disney Channel series Bizaardvark as the guest star. She released her single entitled Boomerang in May 2016. Her single Boomerang has more than 50 million views on YouTube which also has maintained her as a famous singing star.

JoJo's other hit includes 'I Can Make U Dance.'

JoJo Siwa is a teenager with lots of talent and a good personality. JoJo's current relationship status is single.
Previously, JoJo had faced quite ups and downs in the relationship with her co-stars, Kendall Vertes & Kalani Hilliker, Mackenzie Ziegler & Maddie during the show, Dance Moms where she was accused of being mean girls to Siwa.

However, her bond with the girls seems to be solved. Currently, JoJo lives in Los Angeles, California with her mother.

Siwa is very fond of singing and traveling, she considered it as her major hobbies.

As a young teen actress, dancer, and singer, JoJo Siwa earns a decent amount of money. She has released a couple of songs and made her appearance in several movies which adds up to her total net worth that is estimated to be $ 500 thousand.