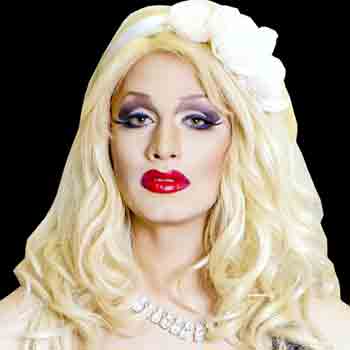 Jinkx Monsoon is a well-known American drag performer. Jinkx is known mostly to the viewers as the “RuPaul’s Drag Race fifth season” winner. After discovering in high school that he was gay, Jerick started performing as a drag queen and later in 2006 also appeared as the lead dancer in the world’s largest drag queen chorus line that made the Guinness Book of World Records. Jerick was also honored as the Artist of the Year by City Arts Magazine. Jerick has given a definite definition to his drag character who is an arrogant and near-addicted mother. Jinkx is one of the most renowned drag queens in the world. Jinkx has the ability to make her viewers laugh until their sides hurt during her performance. Jinkx’s viewers adore her very much.

Jerick Hoffer was born on 18th September 1987 in Portland, Oregon, and is the oldest among her 3 siblings. Jerick joined the DaVinci Arts for his middle schooling and later graduated from Grant High School. Hoffer was raised Catholic although he was of Russian Jewish ancestry from his mother’s side. Jerick suffers from narcolepsy, which restrains the brain’s ability to regulate sleep-wake cycles usually.

He revealed this piece of personal life information later when he was in the season premiere of RuPaul’s Drag Race.  When Jerick was in high school he discovered that he was gay and accepted it. When he was 15 years of age, Hoffer gave his first drag performance in an underage nightclub called Escape. Jerick loved his first experience of drag performance and thus decided to do it professionally.

He gradually paid his way through college by working as a janitor and lastly graduated summa c u m laude with a BFA degree in theater in 2010 from Cornish College of the Arts. He then began living in Seattle, Washington.

Jinkx belongs to American nationality and her ethnicity is White.

Apart from being Jinkx, Jerrick also performs as a Southern medium drag character Deirdre A. Irwin. Then later in 2011 due to Jinkx’s popularity, she was seen in Wes Hurley’s film Waxie Moon in Fallen Jewel. Jerick appeared as character Moritz in the rock musical Spring Awakening in January 2012 at the Balagan Theater based in Seattle.

Then from July 21 to August 19 of the same year, Jinkx went on to star as Angel in the 5th Avenue Theatre’s production of the musical titled RENT. Jerick went on to take part in the fifth season of RuPaul’s Drag Race and he appeared as Jinkx Monsoon with 14 other fellow contestants. Ultimately Jinkx became the winner of the season and was titled “America’s Next Drag Superstar”.

As part of an agreement with RuPaul's Drag Race, Jinkx had sung on “We Are the World” which inspired the song “Can I Get an Amen?”. All the proceeds that came from the song were given for the benefit of the Los Angeles Gay and Lesbian Center. The song remained at the top of the chart for 8 weeks.

Jerick went on to act as the character Hedwig in the rock musical Hedwig and the Angry Inch which was the production of Moore Theatre. Then on 28th February 2013 Monsoon co-hosted the first screening at Seattle’s Central Cinema.

In the same year, Jerick appeared as character Velma Von Tussle in the musical titled Hairspray which was the production of Seattle Men’s Chorus/5th Avenue Theatre. Jinks Monsoon has also appeared in the original one-act cabaret musical titled The Vaudevillians under the performance name Kitty Witless.

From July to November of 2013 The Vaudevillians performed at the Laurie Beechman Theatre in New York City. Jinkx acted as character Tallulah/Dennis in Blue Bloods “Manhattan Queens” that aired on 31st January 2014. Alex Berry who is a Seattle videographer credited a YouTube doc u mentary series under Jinkx Monsoon.

Jinkx Monsoon's Net Worth And Salary

Jinkx Monsoon's net worth is expected to be around $1 million according to some online sources. He has earned a huge amount of salary from his career. She has appeared in the films such as Waxie Moon in Fallen Jewel, East of Adin, and Drag Becomes Him. She also appeared in Web series such as RuPaul's Drag Race, NewNowNext Awards, Steven Universe, Mighty Magiswords, and RuPaul's Drag Race.

Alex titled the docu-series, Drag Becomes Him which focuses on Jerick’s personal life and Jinkx's life. In the same year, it was announced that this docu-series was going to be produced as a feature-length film by Seattle-based producer Basil Shadid. Its premiere is said to be within 2014. Jerick’s album titled The Inevitable Album was released in 2014.

With a dash of makeup, a blond wig, and lady-like clothing, Jerick can confuse many people and make men's heads turn. He loves to buy vintage clothes from Red light and Buffalo. Although many of Jinkx’s fans have enmity with drag queen Sharon Needles, Jinkx admires her and embarked on his drag career being inspired by her.

Jerick hasn’t revealed much about his personal life but at present, he doesn't have a boyfriend and is too young to get married. At 27 he has seen success but Jerick is still competing to be the best drag performer around the world. More details about Jinkx Monsoon can be seen in the wiki and also his official website.

Also See, 46 Years American Actor Marlon Wayans' Dating Anyone After Ex-Wife Angelica Zachary; What About His Family and Children?