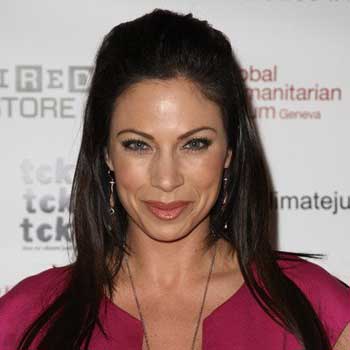 Jill Nicolini is a multi-talented person who has shown her skills in the field of acting and media as well as is a  model and reality TV show participant. She currently serves as a traffic reporter on WPIX 11 Morning News in New York City. The versatile personality has also won the 2002 title of Miss Long Island. She also won Fox’s reality show Married by America 2003. For her work in acting, Jill has been nominated for three Emmy Awards.

Jill Nicolini was born Jill Marie Nicolini on 10th January 1978 in Farmingville, New York, and follows the Roman Catholic religion. Jill is an American and is of white ethnicity. She is the daughter of Michelle Nicolini.

She joined Sachem South High School and graduated in 1996. After that Nicolini went on to attend Stony Brook University but she studied there for only a year.

Jill Nicolini was highly eager to pursue an acting career in her early days. She also participated in Miss New York and was able to win the title.

But later on, she changed her mind and decided to achieve a degree in the field of journalism. Then in 2000, Nicolini received her Associate's Degree in Television/Radio Broadcasting from Suffolk County Community College.

She joined WBLI Radio in 1997 in Long Island. Meantime Jill began working on a Bachelors's Degree in Communication Arts at the New York Institute of Technology. Side by side Jill began reporting at LI News Tonight.

Jill, when she was 24 years old competed in Miss Long Island in 2002 and eventually won the title. But there were huge controversies later on when the evidence surfaced that she had pictured a naked photo for Playboy’s Magazine’s “College Girls” Special Edition. As a result, she could not participate in the Miss New York Crown.

In the year 2003, Nicolini participated in Fox’s reality television program Married by America. The reporter became the winner of the show but did not get married. She worked forcefully and in August 2006 it was declared that she would be one of the women trying out to become a Pussycat Doll.

Before becoming a reporter Jill had a modeling career and even tried to become the official live-action model for Vampirella in 2001. Jill was ultimately given small roles in four feature films and six TV shows including HBO’s Sex and the City and NBC’s Law & Order featuring George Dzundza, Chris Noth, Dann Florek, and Michael Moriarty.

Jill made an appearance as Veronica Taylor in the 2009 action movie Breaking Point. She also featured in a 2014 highly anticipated Comedy, Drama and family movie “Annie” where Jill played the character of Ms. Giannetti.

Jill became the Traffic/Entertainment Anchor on the PIX11 Morning News in the year 2004 where she delivered the traffic and also interviewed top celebrities in the entertainment industry. At one point Nicolini has also served as a fill-in anchor, weather reporter, and feature reporter.

While working at WPIX, Jill along with her fellow co-host, spent her holidays in Iraq in both 2009 and 2010 to help reconnect the troops to their families back at home live via satellite.

Nicolini spent her 2010 holidays in Norfolk, Virginia with the Navy and reported live and reunited the sailors with their families. Jill is a philanthropist and has been occupied in numerous charities like Little Shelter Animal Rescue and The Arthritis Foundation.

In 2017, the media personality again returned to WPIX and landed a job as a traffic reporter for the station's weekday morning newscast.

Jill Nicolini's Net Worth And Salary

Jill Nicolini's net worth is around $200 thousand as of 2019, according to Celebrity's net worth. She currently serves as a reporter and earns more than $63,420, as an annual salary. As a model, Nicolini earned over $41,470.

Nicolini has worked for WBLI Radio in Long Island, in 1997. She started working on her bachelor's degree in Communication Arts at the New York Institute of Technology in 2000 while reporting for LI News Tonight.

She participated in the 2003 Fox reality TV program Married by America, which she won but didn't get married. She had bit parts in four feature films and six TV shows, including HBO's Sex and the City and NBC's Law & Order.

Jill Nicolini is also engaged in many philanthropy works. She is actively involved with several charities as well. Her major charity works in John Theissen Children's Foundation, Little Shelter Animal Rescue, Alliance for Lupus Research, PETA, The Juvenile Diabetes Foundation, The National Institute of Natural Sciences, and The Arthritis Foundation.

The versatility personality is yet to be married but has two children. She began dating her ex-boyfriend Anthony Cumia in 2008 and was near to getting engaged but later they separated.

Jill was later involved in a relationship with hedge-fund manager Joseph Di Virgilio. In October 2014, Jill announced that she was pregnant and a few months later, she gave birth to her baby boy, Austin Thomas. According to the photos she has shared on social media, it said to be that the father of her son is Peter Khachaturian.

I love #myboys although it’s never possible to get them both to at the  ... anyone else have that same problem ?

Nicolini welcomed a second child, a son Jackson Henry in February 2017. She quickly posted her newly born baby photo on her Facebook page tagging Peter who was present at the hospital. Peter's Instagram profile also featured himself and Jill with the two kids. The reporter currently resides in New York City.

As per Peter's LinkedIn profile, Jill currently serves as a sales rep for Dave Bofill Marine Inc. He was previously the owner of Photo Plus Inc too.