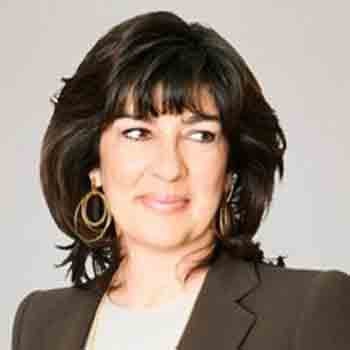 British Iranian Journalist and television host Christiane Amanpour works as a Chief International Correspondent for CNN. She also hosts a nightly interview program called Amanpour for CNN International. She is also a Global Affairs Anchor for ABC News. She is active in this field since 1983. She has been one of the very experienced female journalists and inspiration to the newbies. Christiane Amanpour holds a legacy in journalism. She has a huge dignity and popularity in this arena.  She is known for her fearless reporting style, often parachuting into conflict areas, and her emotional reports.

Amanpour is married James Rubin, a former US Secretary of State, in 1998. It was announced in July 2018 that Amanpour and Rubin were getting a divorce.

Born in the year 1958 January 12 at London, England, Christiane Amanpour was born to an Iranian father Mahmoud Amanpour, and British mother Patricia. She was raised in Tehran, thus, she is fluent in English and Persian. She belongs to British nationality and regarding her ethnicity, Amanpour is a Caucasian.

Amanpour had completed most of her elementary education in Iran.  She has three sisters and she is the eldest of the four. Later her family moved to England when she was 11 during the Islamic Revolution in Iran and then she went to a boarding school in England.

Amanpour also attended Holy Cross Convent, which is an all-girls school located in Chalfont St. Peter, Buckinghamshire. When she was 16, she went to New Hall School in Chelmsford, Essex. The family wanted to return to Iran but due to the circumstances in Iran, they settled in Britain.

Her first major assignment as a correspondent was covering the Iran-Iraq war. She was transferred to Eastern Europe on the fall of European communism in the year 1986. She was again relocated to CNN’s station in Frankfurt, Germany in 1989 where she reported on the democratic revolutions.

Her experience and performance helped her to level up in the company making her way to CNN’s New York bureau in the year 1990.

There is a lot of her works that highlight her career. Christiane has covered several of the war stories which helped her earn the reputation of being a fearless and brave journalist.

From 1992 to 2010, she served in CNN as a chief international correspondent as well as an anchor where she reported on many major issues from the world’s hotspots including Iraq, Afghanistan, Israel, Pakistan, Somalia, etc.

This proves her ability and her dignity in media journalism. It is not an easy task to interview such delegates as you do with a normal man. You have to watch out for your every word and have to have an in-depth study. In March 2010, she joined ABC News as an anchor for the show This Week. After a brief while with ABC News, she returned to CNN on 2011 December 14 and is working for CNN at present.

Christian Amanpour's Net Worth And Salary

Christiane Amanpour's net worth is $12.5 million at present and enjoys a salary of $2 million from her work. She makes a huge amount of money from the agency and is one of the richest journalists in the Industry.

Amanpour worked as a reporter for "60 Minutes" from the late 90s into the mid-2000s, covering the Persian Gulf War, the Bosnian War, and various other conflicts around the world.

Christiane Amanpour is a Christian in religion. She believes in Roman Catholicism. She is said to have done plastic surgery on her face, a face uplift to look young for her age as she has to appear on the screen.

Because of her work, she has nine Emmy Awards and several other awards and honors. She has also been pulled to controversies and has faced many negative critics as well. Without being discouraged, she has dedicated her life to this field.

She is indeed an inspiration to many of the new and young journalists. There has been a long queue of her fans. Christiane is active on her social sites Facebook and Twitter. She also owns her own personal website.

More information on her can be found going through her biography located on different internet sites including Wikipedia. Her pictures and articles on her also can be found all over the internet.

Talking about Christiane’s personal life, Christiane Amanpour is a married woman. She was married to James Rubin, is a former spokesman for the US State Department during the Clinton administration, and US Assistant Secretary of State. He is currently working as an informal adviser to former US Secretary of State Hillary Rodham Clinton and President of the United States of America Barack Obama.

The family had come to New York City in 2010 and again moved back to London, England in 2013 as her husband Rubin announced it because to work on several projects. It was announced in July 2018 that Amanpour and Rubin were getting a divorce. But the divorce is yet to be finalized.

Following their separation, the journalist is leading a single life and currently resides in London.

Amanpour is the niece-in-law of General Nader Jahanbani and Khosrow who was married to Princess Shahnaz Pahlavi.

Christiane Amanpour has appeared on several of the screen and media programs. She has appeared as herself in the Gilmore Girls. She has been the inspiration to an aspiring journalist Rory Gilmore in the series.

She has also appeared in Harper’s Bazaar magazine, movies like Iron Man 2 and Pink Panther 2. She has also given her voice in the animated series called Cosmos: A Spacetime Odyssey as Enheduanna in the episode called “The Immortals.”