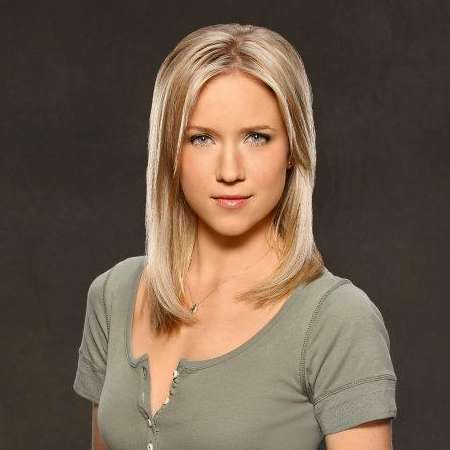 Jessy Schram is best known for her role as Tracy Sterling in the movie, American Pie Presents The Naked Mile. She is also known for her portrayal as Hannah Griffith in an American teen noir mystery drama, Veronica Mars. Schram's other notable television appearances include CSI: Miami, Boston Legal, and The Mentalist.

The actress has also collected a large amount of net worth from her illustrious career which as of 2018 is around $3 million.

Jessy Schram was born Jessica Schram, on January 15, 1986, in Skokie, Illinois, U.S, under the birth sign Capricorn. She is American as per her nationality and is of White ethnic background. Schram first modeled and appeared in TV commercials in her early days. She started performing in musical theater in 1998.

Later, Schram moved to Buffalo Grove, Illinois. She graduated from Buffalo Grove High School in 2004. She moved to Los Angeles following her graduation at the age of 18.

Schram has also appeared in a couple of commercials like Retin-A Micro and Kentucky Fried Chicken. She additionally featured in a music video for J.R. Richards' song A Beautiful End.

From 2015-16, she played a recurring role in a TV series Nashville sharing the screen alongside Connie Britton, Hayden Panettiere, Clare Bowen, Eric Close, and Charles Esten.

Jessy Schram has also discovered her interest in music as well. She started singing and songwriting as a solo artist. She has toured with Joan Baby's soul band, performing at places like The Knitting Factory, Hard Rock Cafe, Tweeter Center, Soldier Field, Navy Pier, Hanc* * k Music Center, and more.

Jessy Schram was signed as both an actress and a model by the Stewart Talent Agency in Chicago. She has established herself as one of Chicago’s most successful child actors and models by booking numerous commercials, print campaigns, voice-overs, and television work.

Jessy Schram's Net Worth And Salary

Jesse Schram's net worth is $3 million at present. She has an annual salary of 200 thousand dollars. She has starred in the movies I Want Someone to Eat Cheese With, American Pie Presents: The Naked Mile, Keith, and Unstoppable.

In 2006, she appeared in an independent romantic comedy film I Want Someone to Eat Cheese With which earned $194,568 at the Box Office. In 2006, she featured in the second part of sex comedy American Pie film franchise’s second installment, American Pie Presents The Naked Mile.

Schram has starred in the movies I Want Someone to Eat Cheese With, American Pie Presents: The Naked Mile, Keith, and Unstoppable. She has also appeared in episodes of the TV series Boston Legal, House, Ghost Whisperer, Without a Trace, CSI: Miami, The Mentalist, and Major Crimes.

Schram starred as Christine Kendal in the series Last Resort from 2012-2013.  She starred as Karen Nadler on the television series Falling Skies from 2011-2014. She had a recurring role as Rachel Seybolt in the TV series Life from 2007-2009.

Jessy Schram is an unmarried woman. Jessy Schram likes to keep her personal life out of the media. Thus, the information related to her relationships, boyfriend, and husband is unknown.

As per her social media, the actress is dating her boyfriend Pierce Taylor is a climber. She posted a photo of her rumored boyfriend on her Instagram account wishing him a birthday.

The actress is an avid animal lover. She loves cats, dogs, and pigs. She spends her leisure time with her pets. She frequently posts their adorable moments on her Instagram. She is an active learner and tries to learn many things as much as possible. She likes mountain and rock climbing. Also, she is an experienced trekker.

Schram is active on Instagram with over 24k followers, as of November 2018. She has also a micro-blogging site Twitter with thousands of followers.