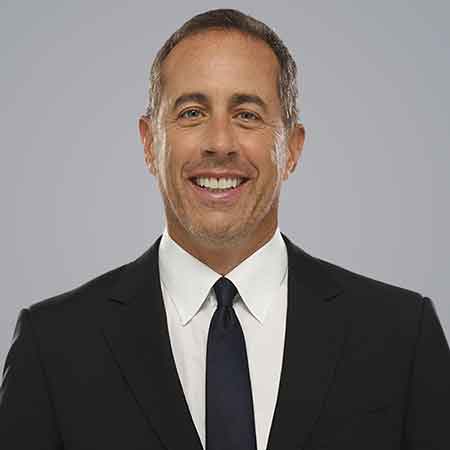 Jerry Seinfeld is a popular American stand-up comedian and actor who is best known for his sitcom Seinfeld from 1989–1998 which became a landmark of changing American comedy culture in the late 20th century. He has worked in several popular television series such as Curb Your Enthusiasm, The Marriage Ref, Jerry Before Seinfeld, Larry David: Curb Your Enthusiasm and so on. As of 2018, he is appearing in the web series, Comedians in Cars Getting Coffee.

Seinfeld specializes in observational comedy which is often based on social obligations and personal relationships. Comedy Central named Seinfeld the "12th Greatest Stand-up Comedian of All Time". Seinfeld is in the field for more than three decades and is still one of the best comedians American has ever seen.

Seinfeld joined Massapequa High School on Long Island for his preliminary education. As a 16-year-old, he volunteered at the Kibbutz Sa'ar, a collective community in Israel. Later he attended the State University of New York at Oswego transferring after his second year to Queens College, the City University of New York and graduated with a degree in communications and theatre.

Seinfeld started his comedy career shortly after his graduation from Queens College. A road to success is never easy,  after struggling for a few years, he began working with the New York City's comedy club, Catch a Rising Star. Then he made his debut appearance on a Rodney Dangerfield HBO special.

In 1979, he played the role of Frankie, a mail delivery boy in the American tv sitcom, Benson which was aired on the ABC network and ran for 158 episodes. Again in 1981, he gained huge fame and recognition after he appeared on The Tonight Show Starring Johnny Carson. He made a great impression on John William Carson which led to regular re-appearance.

In 1988, accompanying with Larry David he made The Seinfeld Chronicles which was later named as Seinfeld so as to avoid confusion with other programs of the same name. This series gained a huge amount of attention and from the fourth season, it was rated as the most famous sitcom on American television. The sitcom lasted for almost a decade for a total of nine seasons with 180 episodes.

During 1993 he published his book entitled Seinlanguage. The book was an adaptation of his stand-up material. It was listed on the New York Times Best Seller list. From 1993 to 1998, he played himself on the American television sitcom, The Larry Sanders Show which was created by Garry Shandling and Dennis Klein.

In 2000 he starred as Comp-U-Comp in the tv series named Dilbert, created by Scott Adams and was able to win the Primetime Emmy Award. Again in 2002, he came up with his second book titled Children's book Halloween which was represented by James Bennett. The book was mainly targeted at young children.

He made a cameo appearance as himself in 2004 in the improvised American comedy series, Curb Your Enthusiasm. On the same year, he also promoted a tv series named the Adventures of Seinfeld & Superman. In 2007, he played a voice role of Barry B.Benson in the computer-animated comedy film, Bee Movie. He also co-wrote the script for the movie.

In 2012, he starred as well as became a creator and executive producer of the tv series, Comedians in Cars Getting Coffee. In the same year, he made a cameo appearance on the comedy-drama TV series, Louie. And he was featured in the song, Outro About Nothing, from the album, The Gifted by rapper Wale in 2013.

Also Read, Jerry Seinfeld declines a hug request from Kesha, Says" I Don't Know Who that was." Know the reason

Jerry Seinfeld's Net Worth, Salary, And Major Source Of Income

Jerry Seinfeld is the richest comedian in the world, with a net worth almost a billion dollars. As of 2019, he has a net worth of $950 million as per celebrity net worth.and his annual income in 2016 was $69 million. As per the Forbes magazine, in 2004 Seinfeld's annual earnings was $261 million, placing him at the top of the celebrity money rank that year. He reportedly took $5 million per episode of Seinfeld to continue the show for a 10th season.

Jerry collected $100 million amount from syndication contract in 2004 and $60 million in 2006. Besides this, he also amassed $10 million for appearing with Bill Gates in Microsoft's 2008 advertisements for Windows. Moreover, he earned $85 million between June 2008 and June 2009 which made him highest paid comedian at that time period.

The stand-up comedian has also played a number of breakout roles in many box office hit movies like Bee Movie which became the quite hit at the box office grossing over $287 million. In the movie, he was joined by the actor Renée Zellweger.

Jerry Seinfeld is also an automobile enthusiast and avid collector who owns 150 collections of cars including a large Porsche collection. He rented a hangar at the Santa Monica Airport, in Santa Monica, California, for an extended period of time during the 1990s for storage of some of the vehicles in the collection.

In 2002 he purchased property on the Upper West Side of Manhattan in New York where he built a $1.4 million two-story garage to store part of his Porsche collection. He has altogether 43 Porsches. His centerpiece car Porsche 959s is worth $ 700 thousand. He thinks that the Lamborghini Miura is the most beautiful car ever designed.

Talking about his personal life, Jerry Seinfeld dated Carol Leifer years before the series Seinfeld was created. He also had a four-year love affair with high school students named Shoshanna Lonstein. He was only 17 years old when they started dating.

In August 1998, he met Jessica Sklar at the Reebok Sports Club and they started dating each other. Before Seinfeld, Sklar was married to Eric Nederlander and after divorcing Nederlander she married Seinfeld on December 25, 1999.

Together the couple bought a house in Amagansett, Long Island for US$32 million in 2000. They welcomed their first child; a daughter named, Sascha on November 7, 2000. And welcomed their first son Julian Kal on March 1, 2003, and their second son named Shepherd Kellen on August 22, 2005. All of them were born in New York City. He is living a happy married life with his wife and kids.

His best friends are fellow comedians Larry Miller, George Wallace, and Mario Joyner. In December 2012, Seinfeld announced that he practiced Transcendental Meditation for 40 years and he is a supporter of the global charitable organization, The David Lynch Foundation.

I would do anything that I could to promote it in the world, because I think it's the greatest thing as a life tool, as a work tool and just making things make sense.