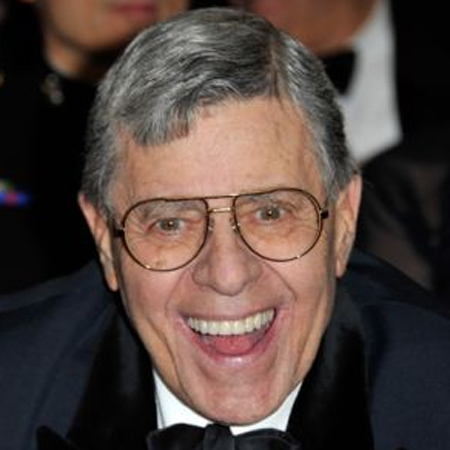 Lewis died from heart failure at the age of 91.

Born as Joseph Levitch on March 16, 1926, in Newark, New Jersey, U.S., Lewis belongs to the White ethnicity and holds an American nationality. He was the son born to Daniel Levitch and Rachel Levitch.

Lewis' father Daniel was a master of ceremonies and vaudeville entertainer. His mother, Rachael was a piano player for a radio station.

At the age of five, Lewis started performing alongside his parents in Cat. He dropped out of the Irvington High School to pursue a career as a full-time entertainer & started using the stage name, Jerry Lewis.

Jerry Lewis developed a comedic routine called the ‘Record Act’ in which he mimed the lyrics of favorite songs while a phonograph played the songs offstage. He was given a chance to perform at a burlesque house which flopped. Unable to get any more shows he worked at odd jobs to make ends meet.

Lewis father’s friend, Max Coleman helped him book a performance at Brown’s Hotel in New York. This time his show was a big success and motivated him to further his career in this field.

Lewis appeared in his first movie titled ‘The Delicate Delinquent’ was a big hit and gave him the confidence to move on as a solo artist. He also directed the 1960 movie ‘The Bellboy.'  He wrote and starred in the movie.

Lewis has also made various appearances on stage. He made his Broadway debut replacing cast member in the revival of the baseball musical, ‘Damn Yankees’ in 1994. Apart from the U.S., He is also a much-respected artist all over Europe.

Jerry Lewis was married twice in his life. The name of his first wife is Patti Palmer, a former singer with Ted Fio Rito. The couple tied their knot on October 3, 1944. They had seven children Gary Lewis, Ronald Steve, Scott Anthony Lewis, Christopher Lewis, Anthony Lewis, and Joseph Lewis.

Their eldest child, Gary is an American musician who was the leader of the 60s pop group, Gary Lewis & the Playboys. However, after living 36 years together, they divorced in 1980.

His son Josheph Lewis died of narcotics overdose on October 24, 2009. After the divorce, he married SanDee Pitnick. They adopted a daughter named Danielle Sara Lewis.

Lewis had a great earning throughout his career. His movie, Hardly Working was a box office hit grossing $25 million throughout Europe and South America. He has maintained a net worth of $50 million.

Lewis had numerous illness and addictions that are related to aging and back injury. He had a back injury after a comedic pratfall from a piano while performing at the Sands Hotel and Casino on March 20, 1965. He became addicted to the painkiller for thirteen years, as the accident left him paralyzed.

Lewis died on August 20, 2017, at his home in Las Vegas, Nevada. He was at the final stage of cardiac disease and peripheral artery disease.

According to his last will, he has excluded all his six children and their descendants from his first wife leaving his estate to his second wife, SanDee Pitnick.