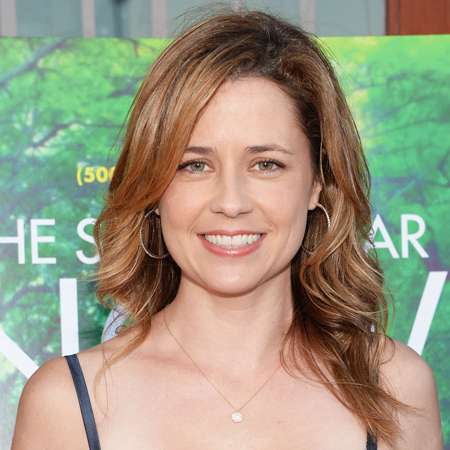 Emmy-nominated actress, Jenna Fischer is well- known for playing Pam Beesly on the hit NBC series The Office. Her film credits include the 2007 comedy Blades of Glory and Walk Hard: The Dewey Cox Story and The Promotion.

Raised Along With Her Sister Emily Fisher

Jenna Fischer was born on March 7, 1974, as Regina Marie "Jenna" Fischer. Her birthplace is Fort Wayne, Indiana, United States. She was born as the daughter of Anne Fisher and James E. "Jim" Fischer. Her father was a plastics engineer and her mother was a teacher.

CAPTION: Jenna Fischer with her friend during her high school days SOURCE: Instagram

Fisher was raised along with her sister, Emily Fisher in St. Louis, Missouri. According to her nationality, Fisher is American. Her ethnicity is white.

Fisher started her acting career from 1998 film Channel 493 as Rane. The same year she has made her presence in Born Champion. In 2004, she was also part of the short film The Women. In 2006, she made her presence in American science fiction-comedy horror film Slither.

Jenna Fischer has also been very successful for her television appearances; she made her debut on television in 2001 from an American sitcom Undeclared. She has also been worked in many other television series and films like What I Like About You (2002), Strong Medicine (2003), Cold Case (2004), Six Feet Under (2005), Dan Vs. (2012) and Newsreaders (2015).

Jenna gained further attention when she took the role in a TV series Splitting Up Together from 2018-19. In the series, she worked along with Oliver Hudson, Bobby Lee, Diane Farr, and Lindsay Price as well.

As of 2019, Jenna Fischer has a net worth of $16 million, according to celebrity net worth. Previously in 2016, the actress was supposed to hold $10 million. During the course of three years, her net worth has increased by $5 million.

Fischer has acc u mulated all of her net worth from her appearance in the TV series and movies. As per the sources she was supposed to get paid $20k per annum per her role in The Office from 2005-2006.

List of her movies box office earning which has earned huge in box office collection;

Fischer sold her Studio City house for $2.015 million. The actress bought the mansion for $1.83 million, in 2009. The 3,490 square feet property has four bedrooms and four bathrooms.

Married To  Lee Kirk After Divorce With
James Gunn

Jenna Fischer had an affair with an America American screenwriter, director, and producer James Gunn. She met her boyfriend through her childhood friend Sean Gunn. Later they married on October 7, 2000. After seven years of a marriage relationship, they attended divorce in 2007.

After her first marriage, Fischer was engaged to screenwriter Lee Kirk and the couple confirmed their engagement in June 2009. Fisher and her current spouse married on July 3, 2010. She has two children, a son, and a daughter. Fisher’s elder son was born in 2011 and her daughter was born in 2014.

In July 2019, the pair have already celebrated their wedding anniversary and still going very strong together.

Fischer is a talented woman with great acting skills. Her current relational status is married. Her sexual orientation is straight and she has not been in a relationship with many guys in the past or she has not revealed much about her past dating history.