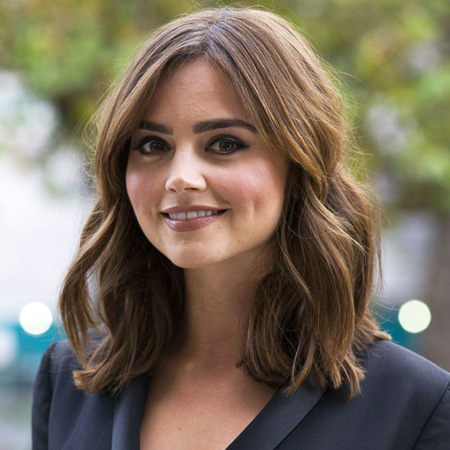 Jenna Coleman is an English actress, well known for her notable appearances as Clara Oswald in the British television series, Doctor Who, also as Jasmine Thomas in the British soap opera, Emmerdale.

Jenna Coleman was born on 27 April 1986 in Blackpool, Lancashire, England. Jenna is the daughter of Keith Coleman and Karen. She also has an older brother Ben. Coleman is white in ethnicity and holds a British nationality.

Coleman attended Arnold School, where she was the head girl. Jenna stated that she regrets not having a conventional university experience.

During her school days, she was the member of the theatre company in Yer Space, with which Coleman performed in the play Crystal Clear at the Edinburgh Festival.

Coleman also won an award for her excellent performance, and the play was also terrific. In an interview with the Radio Times in 2015, Jenna disclosed that her granny named her Jenna after the role of Jenna Wade played by Priscilla Beaulieu Presley in an American drama series, Dallas.

In 2005, Jenna was auditioning for drama schools, she landed the part of Jasmine Thomas in Emmerdale. At the 2007 British soap Awards, Jenna was nominated for the Best Newcomer award.

Jenna was also nominated for the 2006 National Television Awards for Most Popular Newcomer award. At 2009 British Soap Awards, Coleman was nominated for the Sexiest Female, Best actress, and Best Dramatic Performance awards.

Later in 2010 December, BBC Four announced that Jenna would be featuring as Susan Brown in a  television series, Room at the Top. The series was adapted from the novel of the same name 'Room At The Top,' written by John Braine.

The adaptation was originally intended to air in 2011 April but, was canceled due to a rights dispute between the production company and Baine's estate. Later, by 2012, the dispute was resolved and was aired in two parts on 26 and 27 September.

Jenna has also voiced the character, Melia in the English dub of the 2011 video game, Xenoblade Chronicles. In the year 2012, Jenna featured as Rosie in Stephen Poliakoff's original drama series, Dancing on the Edge.

On 21 March 2012, Doctor Who producer, Steven Moffat confirmed at a press conference that Jenna would play the companion of the Eleventh Doctor. Moffat chose her for the role because she worked the best alongside Smith and could talk the character faster than he could.

In 2016, Jenna appeared in ITV's eight-part drama following the reign of the Empress of India and British monarch, Queen Victoria. The actress also stated that she was not entirely informed about Victorian history.

Coleman argues that this role was able to help her break out of her supposed box as a northern working-class character that Emmerdale put her in.

Jenna Coleman had quite a few ups and downs regarding her personal affairs. Coleman dated her first boyfriend, Karl Davies in 2006. The couple stayed together for three years and ended up in 2009.

After two years staying single, Coleman began dating Richard Maiden in 2011. Richard is a Scottish actor. Jenna had a long time relation with Richard Maiden for five years which ended up in 2016.

After that, Coleman began dating Tom Hughes, her Victoria co-star. The couple had been dating since a year which was revealed later. Currently, Jenna sharing a happy life with Tom Hughes.

Jenna Coleman earns a decent amount of net worth from her acting career as she has portrayed in several notable movies and worked as a voice actress also, which adds up to her total net worth, estimated to be $ 5 million.