Jenna Clause, a Canada-raised American actress is famous for playing the role of Martha Blackburn in the adventure mystery-drama The Wilds (2020). Turned professional in 2015, Clause records only 6 acting credits so far but her promising on-screen approach has grabbed her wide attention. Over the years, she has worked in films: You Are It, The Furies Inside Me, and Cold Brook.

Born on February 20, 1999, in Buffalo, New York, the USA, Jenna Clause holds an American nationality. Although she barely has opened up about her family, she has ties with Canada and grew up in Southern Ontario. Clause is a member of the Cayuga Nation Wolf Clan from Six Nations Reserve located in Ontario.

From an early age, Clause was fond of acting, so, to take a professional turn into a career, she took theater cla s ses in the School of Dramatic Arts (SODA) and Imagination Drama School in Niagara Falls. After that, Jenna attended Actors Training in New York and Toronto Acting Studios.

At the age of 16, Jenna made her on-screen debut in a brief role in the short-film The Bikers. Later that year, she was cast as Patty in You're It (2015) and as Linda in The Furies Inside Me (2015), sharing the screen with Mateo d'Amato, Daniel James, Jenn Gotzon, and Taylor Groothuis.

In 2017, Clause worked in the short-film In the Beginning was Water and Sky and then in Cold Brook (2018) featuring Brad William Henke, William Fichtner, and Mary Lynn Rajskub.

The American actress got her career breakthrough in 2020 after she was portrayed Martha Blackburn in the TV series The Wilds (10 episodes) co-starring Sophia Ali, Shannon Berry, Reign Edwards, Mia Healey, and Helena Howard. 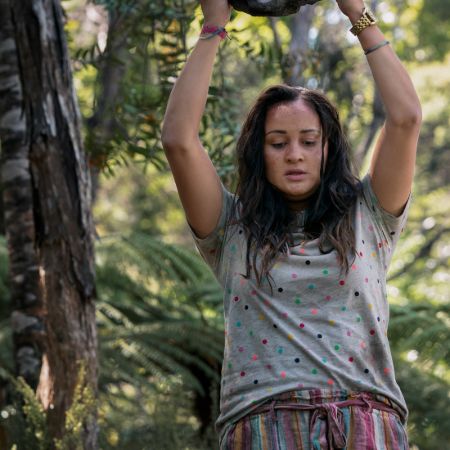 In an interview with Toronto Guardian in late 2020, Jenna stated that she auditioned for the role in The Wilds back in 2018, and sent 3 videos. Her impressive acting skills saw her an email for a screen-test and ultimately won the role of Martha.

The TV series finished filming in February 2020, ahead of the coronavirus pandemic lockdown. The Wilds premiered on December 11, 2020, on Prime Video, and had a rating of 7.32/10 by Rotten Tomatoes. Moreover, in December that year, it was renewed for the second season.

Jenna Clause's Net Worth and Earnings

As of early 2021, Clause has an estimated net worth of $100,000. Without any doubt, the major source of her income is the acting career; the pa s sing she turned into a profession. Although Jenna never disclosed her actual payroll, she grabs tens of thousand dollars per episode. Most notably, the American actress worked in the acclaimed TV series The Wilds (2020).

Blessed with such a prominent acting approach, Jenna Clause's fortune can hike in the coming days with upcoming projects.

An avid Instagram user (@jennaclause), Clause has over 82.2K followers on her official account. Despite the fact that she prefers to keep her family details low-key, she is quite open about her relationship status. Often, Jenna features her boyfriend on her Instagram posts.

However, for now, further information on her boyfriend is yet to be out.

Jenna and her mysterious love are seen together since an Instagram snap of 2018, but probably are dating for a long time.

Aside from deep love for acting, she is quite a book worm too. Moreover, the tattoo enthusiast has a rose tattoo on her side of her finger (left hand), a tattoo 'I VIII' on her right wrist, and a script inked on her back.

3) Why Is Jenna Clause Famous?
Answer: The American actress got TV fame after playing the main cast Martha Blackburn in 'The Wilds'. The first season premiered on December 11, 2020, and saw a Rotten Tomatoes rating of 7.32/10.

4) Is Clause Dating Currently?
Answer: Yes, Jenna is currently in a relationship and often posts pictures with him on her Instagram (@jennaclause). But, the detail on her boyfriend is yet to be out.