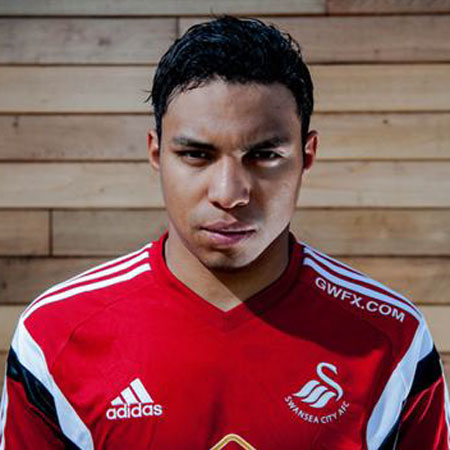 Jefferson Antonio Montero Vite, popularly known as Jefferson Montero, is the name of an Ecuadorian footballer. He was born in the year 1989 September 1 at Babahoyo, Ecuador. Pedro Montero and Mercedes Vite is the name of his parents. He cherishes the height of 173cm and has the body weight of 70 Kg. He is a married man. Sonia Alvarado is the name of his spouse. They got married in 2012. There is no other information available on his personal life.

Jefferson Montero is a talented footballer whose main position is sturm-left wing but can play well from right wing as well as a secondary striker.  He is excellent at acceleration. His physical traits are worthy to praise. He is agile and has balance in the game. He is skilled in dribbling the ball. He is good at passing and shooting. He has got good power in the shots. He is not good at tackles so does not dive into tackles. He is comparatively of less height so he does not go for headers often. He is good at short passes than long passes. He has good control over the ball but he misses the target while passing the ball. He does not play the ball in air. He likes to play it on the ground. He has a strong right foot. He can play well from his left foot as well. His attacking work rate is higher than defensive. He is considered to be a selfish player.

Jefferson started his youth career joining at Emelec and from the same club in 2007, he made his professional debut. He appeared in 22 matches bagging 2 goals. In 2008, he joined with Independiente Jose Teran. Shortly after his arrival, he was loaned to Mexican outfit of Dorados de Sinaloa in 2008. He appeared in 5 matches with a goal score for Dorados. After a season with Jose Teran, he was signed by the Spainish Club Villareal. In the start of the season of 2009/2010, he spent most of his time with the reserves in division two as one of the most important player. He appeared in 32 matches from this team with 10 goal scores. In 2010, he was promoted to the first team of Villareal. He spent two seasons in the team appearing in 9 matches with a goal score. Within the time period, he was loaned to Levante in 2011 and after the return, he was again loaned to Betis for the 2011/2012 seasons.

Jefferson Montero was transferred to Monacras Morelia in 2012 by Villareal in three year contract. He is in the current team of Morelia as a forward wearing jersey No.10. He is also in the Ecuador National Team since 2007 as a midfielder. He has appeared in 38 cap matches from the team making 8 prominent goals for the team. The information on salary of this player is missing. His current market value is 3.3 million Euros. Ungeklart is the name of his agent.