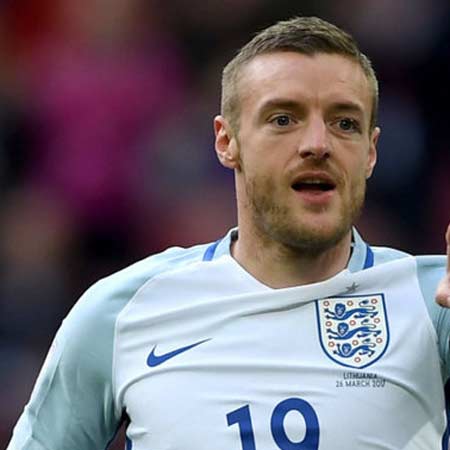 Just like Leicester's fairytale campaign of 2015/16 season their main striker Jamie Vardy's story is a fairytale in its own way. A few years ago before Leicester's incredible triumph in the Premier league Jamie Vardy was playing for a non-league football club.  At the age of 16, he was released by his hometown club saying he was too thin and skinny to play football. But that did not defy footballer inside Jamie Vardy.  He initially worked at the factory but again continued playing football. Against all odds from the non-league side, he made to Leicester and scored 20 goals in their premier league winning campaign for them. In the process, he made a premier league record by scoring 11 goals in a row.

He is a hardworking striker with a great engine, tracking opponents' back and scoring important goals for the team. He is also included in his country's 23 man squad to play in the FIFA Worldcup 2018 Russia.

Jamie Vardy was born Jamie Richard Vardy on 11th January 1987 to father, Richard Gill, and mother, Lisa Vardy in Sheffield, United Kingdom. Jamie Vardy joined Sheffield Wednesday's youth system during his teen years but at the age of 16, he was released by the club stating he was too small and skinny to play football.  He then joined Stocksbridge Park Steels youth system and made debut in 2007.

In June 2010 Vardy was signed by FC Halifax Town's former manager Neil Aspin to play for the club for a fee of $20,000. He debuted for Halifax Town on 21 August 2010 against Buxton and scored the winning goal in a 2-1 win. In his first season at Halifax, he finished as clubs' top scorer with 26 goals in 37 appearances. After a one year spell in Halifax, Vardy joined conference side club Fleetwood Town. He scored his first goal for the club against Kettering Town in a 3-2 win. In his one season at the club, he scored 31 goals becoming the league's top scorer and led Fleetwood Town to the Conference title and first-ever promotion to the football league.

On 17 May 2012, Jamie Vardy transferred to Championship club Leicester City for a reported fee of $1.33 million which was a non-league transfer record. He made his debut against Torquay United at first round of League Cup in a 4-0 win.  He made his football league debut against Peterborough United in a 2-0 win.  He scored his first league goal against Blackburn Rovers in a 2-1 defeat. Vardy did not have a good first season at the club however his form improved in 2013/14 season and scored 16 goals at the end of that season as Leicester City were promoted to the Premier League. On 21st September 2014, Vardy scored his first Premier League goal and delivered the man of the match performance against Manchester United in a 5-3 win. 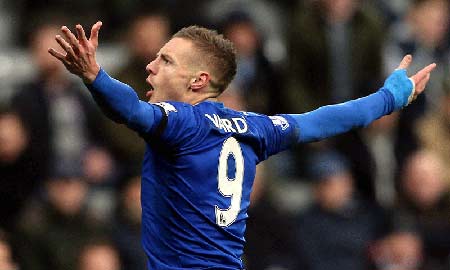 At the start of 2015/16 season, a new manager in the form of Claudio Ranieri arrived at Leicester City.  New additions such as Ngolo Kante was added to the midfield as Leicester started the season with a bang winning their first match in a 4-2 win against Sunderland. Leicester City continued their unexpected impressive form in the season and Jamie Vardy broke Van Nistelrooy's record scoring in 11 consecutive matches.

On 10 April 2016 Vardy scored both goals in a 2-0 win becoming Leicester's first player since Legendary Gary Lineker to score more than 20 premier league goals in a single season. In 2015/16 season Vardy scored 24 league goals and led Leicester City to first ever Premier League title in club's history.  He was also selected in PFA team of the year. He won FWA Footballer of the year and 2016 Barclays Premier League player of the season award. In his six seasons at the club, Vardy scored 89 goals in 234 appearances for Leicester City.

On 21st March 2015, Vardy was called for the first time to represent his National team and made his debut in a goalless draw against the Republic of Ireland in Euro 2016 Qualifying game.  He scored his first goal for England National team in a 3-2 win against Germany.

Always such an honour to play for England! Today has been an incredible day.... Wow #england #worldcup

Jamie Vardy's Net Worth And Salary

Vardy had a hard career in football and once took $40 per week as a salary from his old club Stocksbridge Park Steels. But now he earns $106,827 per week from Leicester City.  His estimated net worth as per 2018 is $12 million. He has boot sponsorship with Nike and is the founder of the V9 club which helps to promote non-league talent.  His car collections include BMW, Audi, Range Rover, and Bentley.  He also owns a luxurious house in Lincolnshire Countryside costing around $3.3 million.

Jamie Vardy married Rebekah Vardy on May 25, 2016.  She was also a contestant in a reality show Get me Out here I am a Celebrity. The pair has one daughter named Sofia Vardy. Vardy also has two children from his previous relationship.

At one time Jamie Vardy used to work in a factory manufacturing medical splints when he used to play for Stocksbridge Park Steel. Now he has a stand named after him on the home stadium of Stocksbridge.  In December 2015, a Leicester food manufacturing company published a limited edition of salted crisp named after him. He is also an ambassador for special needs school Dorothy Goodman school in Hinckley.