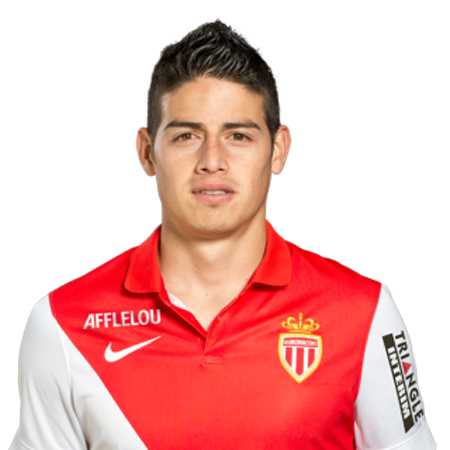 James David Rodriguez Rubio commonly known as James has won the Golden Boot as the top scorer in the 2014 World Cup. He is a Colombian professional, plays as an attacking midfielder/winger for German side Bayern Munich (on loan from Real Madrid) and the Colombian national team.

Guardian ranked this footballer in 59th position among 100 best footballers in the world.

James Rodriguez was born on July 12, 1991, in Cúcuta, Norte de Santander, Colombia. He is the son of Wilson James Rodriguez Bedolla and Maria Del Pilar Rubio.

His father was also a football player, who played for the Colombian national team and was a great influence on his career.

Rodriguez suffered from communication disorder during his childhood days due to heavy stammering and a speech therapist was hired to help him get over his problem.

He is the only child of his parents who inherited his passion from his father and started the sport at an early age of two. He used to play Pony Futbol with Academia Tolimense in his early days.

In January 2004, at the age of 13, he scored a hat-trick on the way to finals of the Pony Futbol tournament in Medellin. He was named Most Valuable Player of the tournament with nine goals.

Rodriguez graduated in Engineering from Universidad Nacional Abiertahttp from afar. He is the product of Envigado's youth system and is the second youngest Colombian player to make professional debut at the age of 14.

Rodriguez made his professional debut in 2006 with the Colombian second division club Envigado. He spent his whole youth career playing and being trained from Envigado.  He reached to the Colombian first division through the 2007 promotion. He became the second youngest Colombian player to start a professional match, playing his first match on May 21, 2006.

He spent a season with Envigado appearing in 30 matches with 9 goals and moved to the Argentine Club Banfield.

He was signed to Argentine based sports club, Club Atletico Banfield in 2008. He made his first-team debut for the club on February 7, 2009, and scored his goal on 27th February with a long-range strike in a 3-1 win over Rosario Central.

In December 2009, Italian club Udinese planned to make a bid for Rodriguez for a reported fee of $5.8  million USD after the 2010 Copa Libertadores. However, the bid was rejected by Rodriguez labeling it as insufficient.

He scored a golazo (an awesomely amazing goal in Spanish) in the match against archrivals Lanus in the 2009-2010 season of Primera Division.  With a left-footed lob, he scored to make the game 2–0 in the final minutes.

After the game, a daily sports website, Diario Ole compared his playing style to Cristiano Ronaldo and nicknamed him the James Bond of Banfield. He scored his first Copa Libertadores goal on February 10, 2010, in a 2-1 home win over Mexican club Monarcas Morella.

Rodriguez was signed by Portuguese based sports club, Futebol Clube do Porto on July 6, 2010, for $5.9 million USD with 30% economic rights retained by other parties. He signed a four-year deal with the club with a release clause of $34.9 million.

He played his first game for the club on 18th July, in a friendly against Ajax, where he scored his first goal.

He scored his first competitive goal on December 15, 2010, in Europe in a 3–1 home win against Bulgarian club CSKA Sofia. He scored a hat-trick and assisted once in the game against Victoria de Guimaraes in the 2011 Taca de Portugal Final, in a 6-2 win by Porto.

Rodriguez scored 14 goals for Porto and delivered 11 assists in the 2011-12 season. He won the LPFP Award for Breakthrough Player of 2011-12 Primeria Liga season at the age of 20, becoming the first Colombian player to do so. He became the SJPF Player of the Month twice.

He won Portuguese Golden Ball award in 2012, becoming the second Colombian to be honored after Radamel Falcao as well as the youngest player ever to hold the honor.

Manchester United made a bid for a reported fee of $34.9 million to purchase Rodriguez, was rejected by Porto as being too low.

Rodriguez finished the season with ten goals and three assists in 24 league appearances. He scored 13 goals delivering 15 assists in 32 appearances in all competitions that season.

With Porto's third consecutive league title in the final match of the season against Pacos de Ferreira, Rodriguez, 21 won his eighth trophy since joining the club in 2010.

Rodriguez moved to Monegasque based football club, AS Monaco in mid-2013. He joined the club on May 25, 2013,  for a transfer fee of $52.4 million, the second most expensive transfer in Portuguese football. The transfer also made him one of the most expensive in Ligue 1 history as well as one of the highest in world football.

He made his debut for Monaco in the game against Bordeaux that ended in a 2-0 win over Bordeaux. He missed the second league match to avoid a possible injury. He made his first direct offensive contribution for the club by assisting the first goal of the match in a 3–0 win against Bastia before setting up plays for his team's other two goals.

In the French media, Rodriguez was referred to as the best footballer in the Ligue 1 due to his impressive debut season with Monaco, though he stated that he still required more time to fully adapt in the league.

Although Rodriguez ended his debut season without a trophy, he helped Monaco secure a spot in the following season's UEFA Champions League. He earned a spot in the star Ligue 1 XI on an individual level and led Ligue 1 in assists on the season.

Rodriguez joined Spanish side Real Madrid in 2014. He stated his "love", "admiration" and "passion" for Real Madrid, saying that it would be a "life's dream" to play for them in a post-match interview during the 2014 World Cup.

He signed a six-year deal with Real Madrid on July 22, 2014, for an undisclosed fee, which was reported to be around $73 million.

The move made him the fourth-most expensive player in history, the third-most expensive in Real Madrid's history and the most expensive Colombian to date after surpassing Radamel Falcao's $69.8 million transfer in 2013.

He debuted for the club in the 2014 UEFA Super Cup at Cardiff City Stadium. The match was against Sevilla, in which Real Madrid won 2-0.

He scored his first goal for the club on 19th August in the match against Atletico Madrid, after coming up as a substitute for Cristiano Ronaldo at half-time.

Rodriguez was loaned to Bayern Munich on a two-year-long deal in July 2017. Bayern paid Real Madrid $15.1 million as a loan fee for the two season-long loan. Bayern has the option to buy James for $48.9 million at the end of the loan period.

He scored the first goal of his loan spell in a 3–0 away victory over Schalke 04. He would go on to win the 2017-18 Bundesliga title with Bayern, credited as a key member behind their title defense for his contribution of 7 goals and 11 assists in 23 Bundesliga appearances.

He captained in 2011 FIFA under-20 World Cup from his under-20 National Football team squad. He has received several awards, titles, and achievements from club side as well as nation side. Besides, he has been honored with several individuals honors amongst which Ligue 1 Top Assist Leader and AS Monaco Player of the Year has been the recent ones of the season 2013/2014.

He registered football Club called AS Monaco from squad No.10 and from the first Team of his Nation Colombia in its National Football Team from the jersey No.10 as a Forward and or as a Midfielder.

James Rodriguez's Net Worth and Salary

As per the statistical salary record of 2010, his salary was $78.9 thousand. His market value during the year was $8.5 million. His salary was $2.4 million in 2015, part of which she earned from endorsements.

James Rodriguez is a very talented Colombian Professional footballer playing from the main position of Right-wing as a midfielder. He can play from the left wing as well as attacking midfielder as the secondary positions in the pitch. He likes to play in long balls and has strong skill in it.

He has been the prominent one for the key passes letting him achieve Ligue 1 Top Assist Leader in 2013/2014 season. He has a strong hold on to the ball with strong crossings and passing. He is skilled in aerial duels which made him confident enough to play ball in the air and off the ground.

Rodriguez is considered one of the best young players in the world. He is considered to be the successor of Colombian legend icon Carlos Valderrama due to his playmaking skills. He thus has been nicknamed as “El Nuevo Pibe” meaning “the new kid”.

His skills are described as phenomenal and are acknowledged. His attacking skills and nature have been compared with today’s football star Cristiano Ronaldo.  James is considered as Colombia’s most talented young prospects.

He is a married man and has a daughter. He married Daniela Ospina, sister of Colombian professional goalkeeper David Ospina. The couple tied the knot in Medellín, Colombia on December 24, 2010. They went off to live in Portugal after their marriage.

The couple welcomed their daughter, Salome on May 29, 2013. The family of three resided in Portugal.

The pair announced they are the process of divorcing on July 27, 2017. The reason behind the separation was Rodriguez involvement in a love triangle with model Helga Lovekaty.

As per the reports by Marca, an affair with Lovekaty is the reason for the end of the footballer's marriage to the mother of his only child.