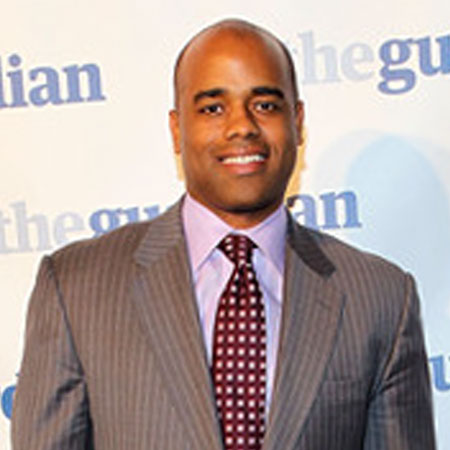 Jamal Simmons is an American journalist, television commentator, and political analyst appearing on channels including the MSNBC, ABC News, CBS News and CNN.

With a broad experience of over 20 years in the field of politics and media, Simmons is one of the sought after personalities for communications and strategic counseling.

Jamal Simmons was born on July 20, 1971 at Detroit, Michigan in the United States of America. He is an American by nationality and an African American by ethnicity.

Having completed his early education from Detroit's Cass Technical High School, Simmons joined Morehouse College to complete his Bachelor of Arts degree. He received the Presidential Award of Distinction at Morehouse college in 2009.

After that, he joined the John F. Kennedy School of Government at Harvard University. He received his Master's degree in Public Policy from there.

Jamal Simmons is associated with the Washington, DC consulting firm named The Raben Group. He provides communications and strategic counseling to clients from that organization. He was involved with the CBS news as the political analyst in 2010 Congressional election.

Prior to that, he was involved with the CNN during the 2008 election. At present, he is seen on various Television channels making expert political analysis. Jamal used to volunteer in different campaigns as he grew up in his hometown Detroit.

Jamal started professionally in 1992 when he travelled alongside Bill Clinton in his successful campaign. Jamal became a political appointment during the first tenure of the then U.S. President Bill Clinton.

Jamal was awarded as the French-American Foundation 2009-10, Young Leader. He also contributed to the council on foreign relations as a team member.

Jamal Simmons is his girlfriend, Jewel James. The couple got married at historic Metropolitan AME Church in downtown Washington on May 14, 2016.

They first met each other on a show in 2013 and started dating after some months.

Jamal is enjoying a happy life and currently resides in Michigan with his wife Jewel and family. The couple doesn't have any children yet.

Jamal is fond of writing and loves traveling to the new places. He has so far traveled to 35 countries of the 5 continents.

Net worth and Physical Appearances

Jamal makes good money providing consultations and advice to corporate clients. Similarly, he is also paid well as a political analyst for different reputed Television channels. Reliable details regarding the salary and net worth of Jamal Simmons has not been revealed yet.

At the age of 45 years, Jamal Simmons is healthy and strong. He stands at the height of 5 feet and 7 inches. He has a bald shaved head with black eyes.