Jaime Pressly Poses With Bare Baby Bump in Bikini with Her Boyfriend and son on 40th Birthday: Photo 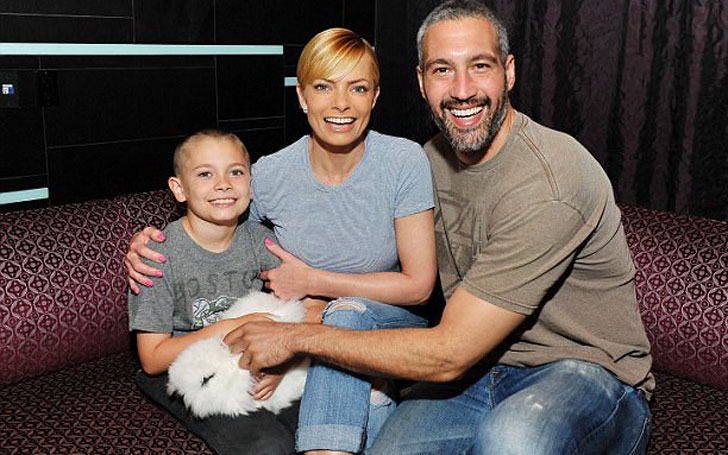 This is the year of celebrity twins! While Amal Clooney and George Clooney, and Beyonce and Jay-Z twins have already seen this world, Jaime Pressley is almost there as well.

The actress/model is expecting twins with her boyfriend, Hamzi Hijazi. Pressly celebrated her 40th birthday with boyfriend Hijazi and her 10-year old son, Dezi whom her ex-fiance Eric Calvo fathered. The My Name Is Earl star shared a lovely photo showing her baby bump in a bikini with her loved ones-boyfriend and son Dezi.

Jamie Pressly shared the photo on Instagram with a caption that reads:

"Thank u to everyone for all the kind birthday wishes!! It's been a fantastic day with my family! #40thbirthday.''

The Hollywood diva is seen cradling her bare baby bump in a black and white bikini in the picture, her pregnancy glow is visible as well!

Jaime Pressly Cradling her Baby Bump in a Bikini

"I went and got a Clearblue test and then had Hamzi [Hijazi] go back to the store and get about five more because I was like, ‘Oh, my God!'"

Recalling the moment when she and her boyfriend... found out they were expecting twins, Jaime Pressly says:

"We were in the ultrasound and we just wanted to hear the heartbeat for the first time and much to our surprise, there were two heartbeats. I didn’t understand what I was looking at on the screen because there were two sacs and two little heartbeats.''

Jaime Pressly and Hijazi are dating since 2011. The actress praised her boyfriend while talking about the pregnancy, she said, "He’s gonna be such a good dad. We’re excited. [Twins] have a built-in buddy.''

Congratulations and good luck to the couple!