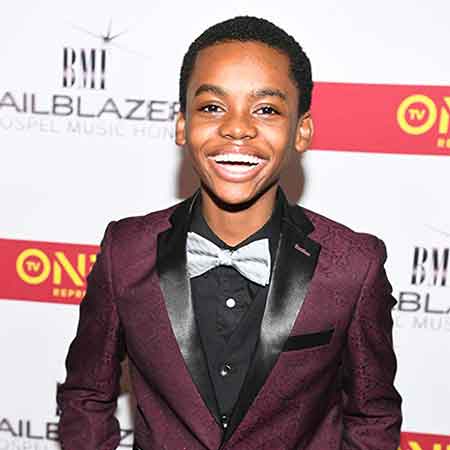 American actor, Jahi Di' Allo Winston is popularly known for his role, Luke O’Neil, a freshman in Netflix's web series, Everything Sucks!. Winston made his acting debut as a young Simba in Broadway's The Lion King. Some of his other works include The Upside, Proud Mary, and Feed the Beast among others.

Jahi Di'Allo Winston was born on 30th November 2003 in Atlanta, Georgia under the birth sign Sagittarius. Winston is American by nationality and belongs to African-American ethnicity.

Yooo! It’s my seeester’s birthday. My A1 homie and twin, love you and I hope your day is lit! Turn up time, when I get back! Peace#ALLTHEWAYUP #BLESSED #SHINEWITHJAHI #YOUCANTOO @kayiwinston

Winston is the son of Juakena Winston and Darryl Winston. His parents raised him with his siblings, a brother Jelani and a twin sister Sekayi.

Jahi Di' Allo Winston made his acting debut in a Broadway's musical based movie, The Lion King as a young Simba after being selected by Walt Disney Theatrical Productions. He worked in the series from 2014 to 2016.

Winston made her TV debut as Andre in drama series, Feed the Beast starring David Schwimmer, and Jim Sturgess. One of his popular work includes 2018's Netflix's comedy-drama web TV series, Everything Sucks! where he portrayed the role of lead character Luke O'Neil, a freshman. The series starred Sydney Sweeney, Elijah Stevenson, and Quinn Liebling.

Some of his other movies include The Upside and Proud Mary.

Regarding his net worth, Winston has an estimated net worth of a thousand dollars, however, the amount is still under review. According to some online sources, a TV star makes an average salary that ranges from $150k to $1 million.

The young and talented actor, Jahi Di' Allo Winston is close to the cast members of Everything Sucks!.  Winston posts several pictures with them on his social media.

He is also very close to his parents and siblings and spends most of his leisure time with them.

That time @peyton_kennedy put me in my place at a Tori Amos Concert... GOOD TIMES... #ALLTHEWAYUP #BLESSED #SHINEWITHJAHI #YOUCANTOO #reneweverythingsucks

In the short period of time, he won the hearts of millions of fans who consider him the next big star of Hollywood.  As of September 2018, his Instagram account has over 193k followers whereas his Twitter has over 14.6k followers.

Besides acting, some of his hobbies include singing, traveling, and listening to music.

Check out the interview with Jahi Di' Allo: