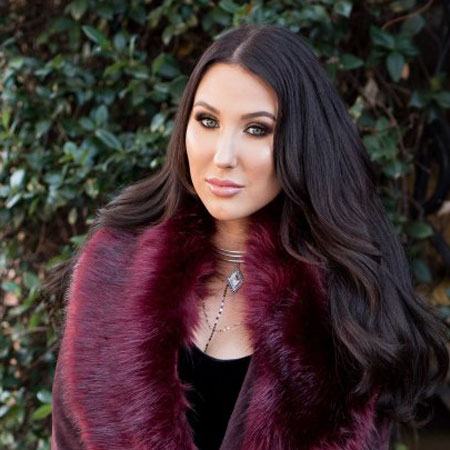 Jaclyn Roxane Hill is a professional make-up artist and a YouTube personality, best known for her makeup tutorial videos and for her collaborations with beauty brands BECCA cosmetics and Morphe Cosmetics. She has more than 5.88 million on her eponymous channel, as of 2019.

Jaclyn Roxanne Hill was born on 20th July 1990 in Illinois, United States. She is the daughter of James and Robin Eilers. She grew up near Mineral, Illinois on a farm that had been in her family for four generations.

She has two siblings, an older sister, Rachel, and an older brother, Nicholas. She along with her family moved to Tampa, Florida after her father said he was called by God to pursue missionary work and become an evangelist.

The family traveled to countries including India and Honduras to preach Christianity for several years. Jaclyn Hill has been estranged from her father since her parents' divorce in 2012.

Hill was homeschooled during her childhood days. She attended college in Sarasota, Florida, where she studied Photography. Hill formerly worked as a freelance makeup artist and at a MAC Cosmetics store.

Back in 2011, Jaclyn Hill started her YouTube channel which has over 3 million subscribers. Her first Youtube video was posted on 20th December 2011. Simultaneously, Jaclyn has also started her own business basically focusing on makeup stylists.

Hill produced a highlighter and named it Champagne Pop with the collaboration of Becca Cosmetics.

They have also created the new Becca x Jaclyn Hill Champagne Collection collaboratively which ranges from eyeshadows to highlighters. Over time, Jaclyn Hill has grown as a makeup artist and learned to do perfect makeup which many people admire

Hill’s earliest video on makeup tutorials was inspired by Kourtney Kardashian and Kim Kardashian. The video tutorial inspired by ‘Kylie Jenner Inspired Makeup’ which was posted on 25th August 2014 helped her to earn more subscribers and get a larger fan base.

Over time Jaclyn collaborated with the top makeup brands including Sigma, Makeup Geek, BECCA, Morphe, and Gerard Cosmetics. Her cosmetics products are guaranteed to sell out on the day of release no matter what brand she collaborates with.

One of the secret that she is so popular is, she regularly interacts with her audiences and answer their question, give them some suggestion and makeup tips and sends images. She is also called the master of contouring. One of the things that her viewers like about her the most is she creates looks for every skin tone and has a unique style.

Jaclyn Hill's Net Worth And Salary

Jaclyn Hill's net worth is said to be around $5 million at present. She recently embarked on a business endeavor that went sour. She pocketed a large sum of money through her sold-out Jaclyn Hill Vault Collection with Morphe Cosmetics.

Jaclyn is credited for popularizing Becca, which was bought by Estée Lauder for $200 million in 2017. Her collaborations with Becca and Morphe were reported to have sold $10.7 million and $12.2 million in EMVs, respectively.

In October 2019, the YouTuber settles into a $20 million rental house. The owner of the duplex is Kambiz Hakim. The 8,838 square feet mansion features 5 bedrooms and 7 bathrooms.

Jaclyn Hill is married to a drummer named Jon Hill. The couple tied the knot on 29th August 2009, in a private wedding ceremony. The couple did not reveal when they first met and how it all started.

Jaclyn, however, filed for divorce from her husband on May 16, 2018. Hill later stated, "We made good friends, not partners in life."

In Jan 2019, the social media star also said that her ex-spouse cheated on her in a reply to fan speculation on Twitter.

As of now, Jaclyn is dating her new boyfriend Farnum who is known as farnumgrindtime on his Instagram account. He is a recording artist and battle real legend.