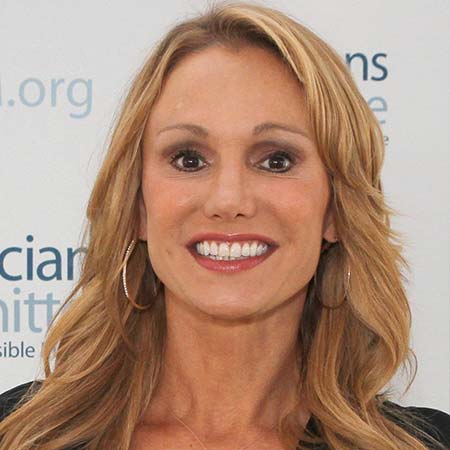 American Actress, Jackie Debatin made her acting debut from the movie Separate Lives and later on, appeared on recurring roles in shows such as Switched at Birth, The Office, and According to Jim. Apart from acting, she also runs her own accounting firm business which is located in Los Angeles and New York City.

Who is Jackie Debatin?

Jackie Debatin was born under the birth sign Scorpio on October 24, 1970, in Alhambra, Illinois, the United States and was raised on a dairy farm located in Southern Illinois.She is of American nationality and belongs to white ethnicity.

Regarding her education, she joined Southern Illinois University at Carbondale from where she completed Theatre and Business.  After the completion of graduation, she moved to LA in the year 1994 to pursue her career in acting.

Jackie Debatin started her career as an actress in the year 1995 after appearing in Separate Lives. After two years of her debut, she again worked in the famous movie, Macon County Jail in 1997. Prior to this, she has worked in several movies including  Moola, Macon County Jail,  Skeleton Man,  SIS, and Besties.

She also made her guest appearance in Kroll Show, Supernatural and Faking It. In Supernatural, she starred alongside Chasty Ballesteros, Nicki Aycox, and Cyrina Fiallo.

Her most notable works on TV series are Walk a Mile in My Pradas, The Office, BachelorMan, and According to Jim.

Apart from this, she is also the owner of an accounting firm which she established in 1999. Her business is related to handling entertainment and corporate financing. It also deals with tax consulting.

She also decently earns from her accounting firm business which earns an average amount of $60,000 annually. She is cast of the movie named Besties which collected $18.8 million n box office under the production budget $9 million.

Debatin is in a blissful conjugal life with husband Hamilton Davis Von Watts. The couple shared the wedding vows in presence of the close family members in 2005.

Apart from this, there is no information about Jackie's life as she is a very secretive person and has not shared much about her personal life.