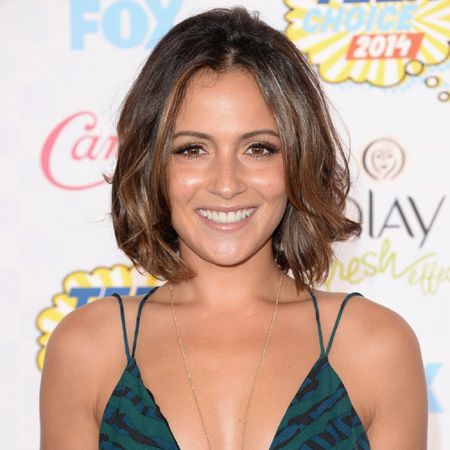 She has been married to Robbie Amell since 2016. They became engaged in 2014. Her net worth is $5 million at present.

Italia Ricci's career began in 2007, with her debut role in the American Pie direct-to-video film, Beta House. Then she went on to have a recurring role on the Disney XD series, Aron Stone. Ricci also portrayed in the music video 'Hate' by Plain White T's as the ex-girlfriend.

In 2009, Italia began portraying in American productions with minor roles in How I Met Your Mother, House, and Greek. The same year she had a recurring role in the Comedy Central series Secret Girlfriend as Sasha.

In 2013, Ricci made her appearance in a small role in Joseph Gordon-Levitt's directional debut film Don Jon. She was also cast in the lead role of April Carver in the ABC Family series, Chasing Life.

Italia also joined the cast of a Supergirl in December 2015 as Siobhan Smythe- the character transforms from Kara's rival and CatCo mean girl-on villain. Ricci is also well known for her portrayals in DC universe.

Since September 2016, Ricci has played as Emily Rhodes in the ABC political drama Designated.

Italia Ricci's total net worth is estimated to be $ 5 million at present. She earns a decent amount of money from her acting career as she has made her appearance in various movies and series.

She has appeared in the movies such as American Pie Presents: Beta House, The Death of Indie Rock, Valediction, Don Jon, Dean Slater: Resident Advisor, and The Remaining.

She has appeared in the TV series such as Aaron Stone, How I Met Your Mother, House, True Jackson, VP, Unnatural History, Chasing Life, And Supergirl.

Italia Ricci is a married woman, she met her longtime boyfriend, Canadian actor, Robbie Amell in July 2008. On 19 August 2014, the couple got engaged. Later on 15 October 2016, the couple got married.