Is the rumors of personal trainer Jillian Michaels being engaged to her partner Heidi Rhoades true? 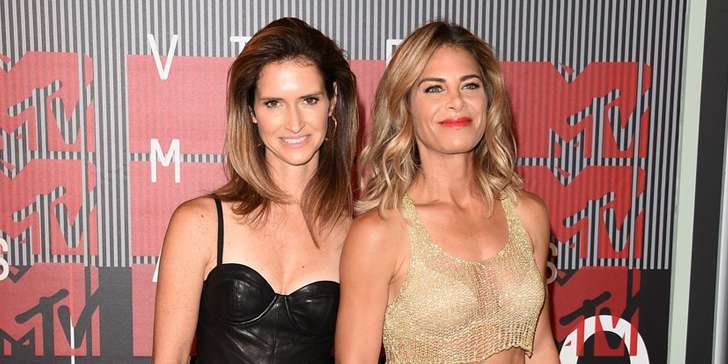 The fitness queen surprised her fans after she proposed her long time lover on her show in a theater in front of her friends and family. She was on her knees holding a ring in her hands with projected head facing her lover's  face with a sweet background music. Heidi had no chance, she said yes with tears in her eyes.

Into the Love life of Jillian Michaels and Heidi Rhoades

Jillian Michaels and Heidi Rhoades, two lovebirds, were  just a casual partner. With growing friendship, they slowly turned into intimate lovers and now they are on the verge of their wedding after getting engaged.

On 8th of March, The Biggest Loser's trainer, Jillian Michaels, had a closing shot on her reality show which surprised her long time lover Heidi Rhoades and her fans by proposing Heidi Rhoades to get engaged.

Jullian, who is currently 42, has been dating Heidi Rhoades since 2009. They were introduced to each other by a common friend. The no expectation and no regret kind of relationship grew into a deeper love as the couple started spending time together.

Jillian was planning to adopt a child  and Rhoades decided to undergo semination procedure to invite a new one to the family.  While most of the recent couple develops a phobia about the semination procedure, Michaels grew more supportive to value  Heidi's decision of inviting an infant to their relationship just to see Jullian happy.

The decision eventually changed their 'no commitment kind of relationship' into a one hundred percent made for each other kind of relationship. Later that year, after the couple was blessed with a son named Phoenix, Jullian adopted a Haitian daughter, Lukensia.

I know I’m an ass hole all the time, but if you’ll continue to put up with me, I would like you to marry me.

The couple is very compatible together and were in a living relationship till the last episode of The Biggest Loser. Jullian silently planned to surprise her by arranging the video footage of them traveling to places together. The video was blended with romantic moments and an expensive diamond embeded nineteen karats white gold ring.

The best part of the clip was their loved ones holding up signs that read "Will You Marry Me." The ceremony was covered on the show in the presence of friends and family. The recent show confirmed that This two lovely couple is soon to be married to each other.