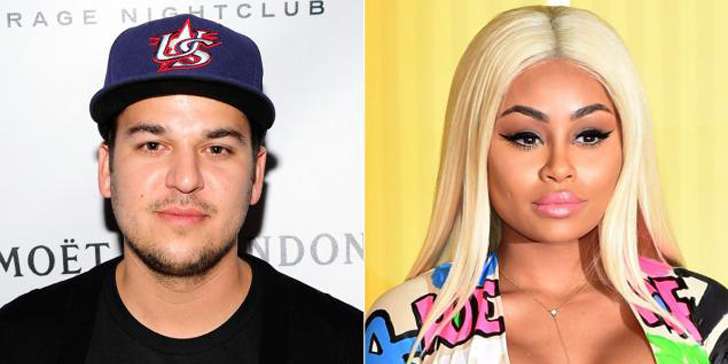 Rob Kardashian of Keeping up with the Kardashians fame is quite a lot in talks these days for his relationship with his girlfriend and now his fiancé Blac Chyna. Yes the speculations of him being engaged to Chyna is actually true and now the engagement has lead to a rumored family feud. The 29-year-old reality star was spotted leaving a meeting in Los Angeles with his now fiancée, Blac Chyna, on Tuesday. When asked about the clash between the Kardashian and Jenner clan he said nothing.

"My family is very happy," Rob confirmed when a reporter asked if his family is upset that he's planning to make Chyna his spouse. Since Rob started dating the 27-year-old model in January, rumors have it that his family is not happy with the pairing, particularly because his youngest sister, Kylie Jenner, is currently dating Chyna's ex-fiancee, Tyga. The "Rack City" rapper. He and Chyna also have one son together, 3-year-old King Cairo. This new young engaged couple was spotted hitting a road trip and grabbing snacks water, sunflower seeds and Cheetos at a gas station in Calabasas, California. Even Chyna's son King Cairo was seen with them in the trip in a gas station with his mama.

After their mini road trip, Rob and Chyna later took it to Instagram to share some pictures of their short adventurous tuesday trip. Kim Kardashian upon her reaction to the whole family feud against her brother humorosly responded it through social media, snapchat. She took in on a whole different level by acting neutral to Rob's decision of marrying Chyna. Kris Jenner rubbished the rumors of the family feud by remarking it as "silly" while a reporter tried to ask her about the hyped topic of Blanc and Rob's wedding. Their affair sure does have grabbed a lot of media attention. Creating a debate about whether or not the couple are creating a mess in the lives of Kardashians and Jenners. Rob is the only brother of the Kardashian sisters. His net worth or salary is estimated to be $2 million.