Is Matt Dallas happy in his marriage? He is married to Blue Hamilton. 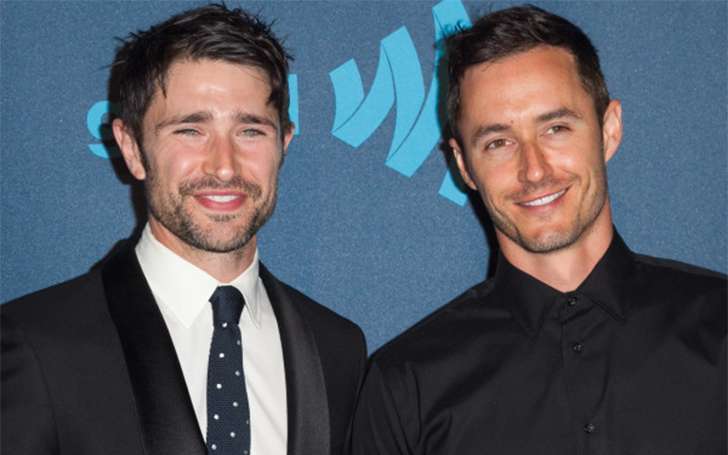 Matt Dallas is an American actor, popular for playing the lead character on the ABC Family series Kyle XY. He is married to musician Blue Hamilton. The couple got married on July 5, 2015.

Matt and Blue dated from 2009 to 2015 before getting married. The couple also runs their own YouTube channel named Matt and Blue, they also have a baby boy of four years.

Is it all sunshine and rainbow in this couple's life? Or, are there any divorce rumors? Find out how Matt Dallas and Blue Hamilton's life after marriage is!

Matt Dallas and Blue Hamilton as a Married couple: Gay husband with a baby

Matt Dallas and Blue Hamilton are one of the happiest couples in Hollywood for two years now. Dallas has continued his profession after marriage; he participated in ‘Worst Cooks in America’ in 2016.

They also have a YouTube Channel named ‘Matt and Blue’ where they just have fun and you can see their son there. They started their channel eleven days before their marriage on 24 June 2015.

Matt and Blue's videos are about exploration, some stupid and funny things about their family and their son.

They have published 100 videos up to 10th May 2017 and their channel’s total view is 11 million and 168K people have subscribed their channel until May 2017.

Kyle XY star Matt Dallas started dating singer-songwriter Blue Hamilton in 2009. However, Matt kept their relation away from the public for some years as he still hadn't come out as gay during that time.

According to E-News, Matt announced his engagement via his twitter on 6 Jan 2013 and it was the first time he came out as a gay guy as well.

The couple got married on July 5, 2015, and it was confirmed via Matt Dallas’ Instagram. Matt shared their marriage certificate on his Instagram.

After that, they became trending on social media and their fans and well-wishers also congratulated them. Matt Dallas and Blue Hamilton have a four-year-old son named Crow. They adopted the baby from Arizona.

They announced their new family member through their YouTube channel on December 22, 2015. The couple seems to be happy and successful in their life and there are no divorce rumors or any such obstacles, they wouldn't adopt a child together if the marriage wasn't going well!

For any more updates on the couple, keep coming back to Article Bio.