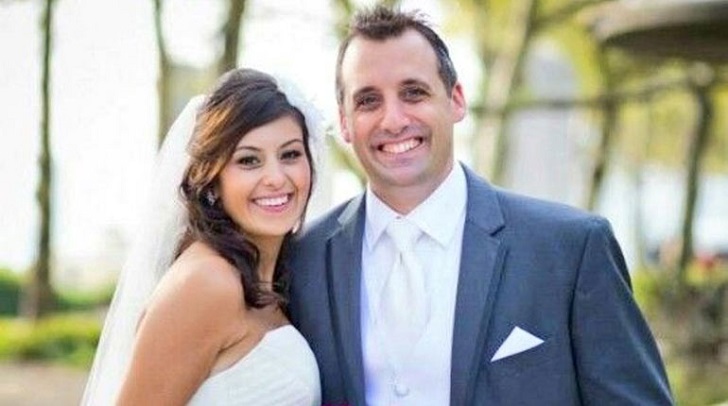 Impractical Jokers' 8th season premiered on May 12, 2017, the practical joke reality series has come a long way from its premiere in 2011 on TruTV. The show currently in the midst of its eighth season has already won millions of hearts. Along with the popularity of the show, the stars of the show comedy troupe The Tenderloins; Brian Quinn, James Murray, Sal Vulcano, and Joseph Gatto are in the constant limelight as well.

One of the Impractical Jokers Joseph Gatto is currently married to wife Wife Bessy Gatto. The couple is happily married since 2013 and blessed with two kids. We have all the details of the couple here!

Impractical Jokers star Joseph Gatto and wife Wife Bessy Gatto are a happily married couple. The couple got married in 2013 and the two are blessed with two kids.

It is yet to be revealed when the two first met and started dating. But the loving couple since their marriage has been sharing a blissful relationship. However, the lack of their media appearances has made it difficult to track down their current life status.

Do They Have Any Kid?

Joseph Gatto and his spouse Bessy Gatto are blessed with two children. The couple welcomed their first child a daughter named Milana in May of 2015. Bessy gave birth to their second child, son Remington Joseph Gatto on July 31, 2017.

Joseph is a proud father and a loving husband. His social media is full of several pictures of his lovely family. The comedian time and again shares pictures of his wife, son, daughter, and dogs.

On his Instagram post on  2 August 2017, Gatto shared a cute snap of his newly born baby boy where his son Remington Joseph Gatto appeared holding his hand and he announced the arrival of his second child with the following caption:

"Here's my son Remington Joseph Gatto. Or as we call him, Remo. Thanks for all your thoughts. Mom & baby are doing well. Hold on tight buddy, it's gonna be a hell of a ride."

Gatto is also a dedicated dad. In one of his Instagram posts on 24 December 2016, he shared an adorable picture with his little princess working in a kitchen and mentioned her as daddy's girl. He captioned the cute picture:

"My gorgeous helper in the Christmas kitchen. Love this little one #daddysgirl"

On his next post, he shared a sweet picture with his lovely wife and daughter on the occasion of Christmas. We can see in the picture that he feels happy to be with his family. The couple has been savoring every moment they have together. On 2 September 2019, they celebrated their 6th marriage anniversary.

The TV personality currently resides in New York City along with his wife and kids.

They were high school friends and they formed their group The Tenderloins in 1999. After a long and successful history, they won the $100K grand prize in NBC’s It’s Your Show competition before launching their show.

In March 2018, Tru TV announced that the show would be renewed for an eighth season which will air in February 2019. The TV also confirmed an Impractical Jokers feature-length movie is planned to air in 2019 as part of the show’s eighth season.

The show currently running its eighth season and it is also scheduled to premiere its ninth season in 2020.  Recently, the death of Joseph circulated the internet and the fans were quick to send their heartfelt condolence, however, it was later revealed that the late Joe Gatto was the Joe Gatto we knew. He was a teacher, an artist, and a father to three kids, including the head of the Italian-American Museum of Los Angeles, Marianna Gatto, and state assemblyman Mike Gatto.