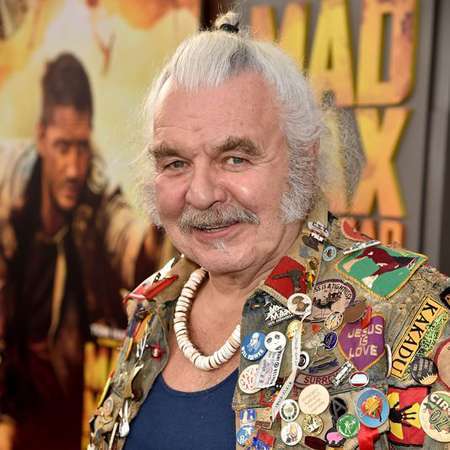 Hugh-Keays-Byrne, an Australian actor, is well known for her appearances in numerous films and TV series. He has enacted in several movies and TV shows including Mad Dog Morgan, For Love Alone, Kangaroo and Sleeping Beauty.

In 2015, he appeared in the action-adventure film Mad Max: Fury Road, a fourth installment and reboot of the Mad Max Franchise, as the role of villain Immortan Joe.

Hugh was born on 18th May 1947 in Srinagar, India. His parents are British. He spent his childhood in Britain with his parents. He is of English nationality.

Hugh was born when his parents were in India. His ethnicity is Caucasian and has a blend of Indian culture. Hugh also moved to Australia in 1973  and spent several years there.

Byrne’s received his education from England and began his career as a stage actor. In 1968, he appeared in Royal Shakespeare Company productions and including As You Like It, The Balcony, Doctor Faustus, Hamlet, King Lear, The Man of Mode, Much Ado About Nothing, The Tempest.

Byrne’s first television acting job was in Britain in the program Boy Meets Girl in 1967. After that, he has been seen in many movies including Stone, The man from Hong Kong, Mad Dog Morgan.

One of his most prominent roles till date is that of Immortan Joe in the 2015 film Mad Max: Fury Road. He appeared in the alongside Tom Hardy, Charlize Theron, Nicholas Hoult, Nathan Jones, Zoe Kravitz and other stars.

Hugh Keys-Byrne is an unmarried man. He is not dating currently (at least publicly). Hugh likes to keep his private affair away from the clutches of the media.

This is the thing about Hugh that catches the public’s eyes. However, it seems like he is living a happy life.

Net Worth and Awards

Hugh Keays Byrne has nominated in several awards for his performances.

In 1977, he won Logie Award in the Best Actor Category from film Rush. In 1979, he received a nomination for AIFA (Australian Film Institute Film Award) for Best Supporting Actor from the Mad Max.

2012, he was nominated for Alliance of Women Film Journalists Award in the EDA Special Mention Award – Most Egregious Age Difference Between the Leading Man and the Love Interest from the film Sleeping Beauty.