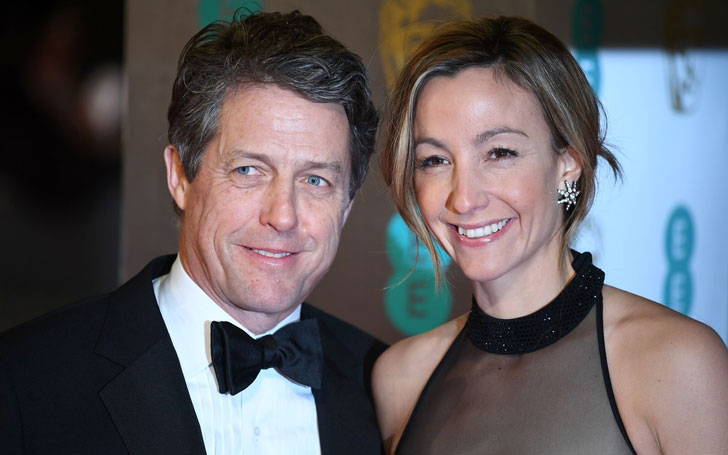 Notting Hill actor Hugh Grant and his actress girlfriend Anna Eberstein are expecting their third child together, fifth for the actor Grant.

The 57-year-old British actor and Anna were spotted together while they headed to dinner at Madeo restaurant in LA on Saturday, Jan. 6. They were again snapped together in New York City airport on Tuesday where the Swedish television producer's baby bump was clearly visible.

The lovebirds attended the Sunday evening's Golden Globe Awards together. They both didn't comment on Anna's pregnancy. However, Anna's mother reportedly confirmed the news to the country tabloid Aftonbladet.

Anna's mother, who is also a Swedish politician, told the paper,

I'm very happy to be getting another grandchild. She is due rather soon.

Grant and Eberstein have been in an on and off relationship for last seven years. In their seven-year-long relationship, they have welcomed two children together, but they have kept their kids out of the spotlight.

Hugh Grant and Anna Eberstein, who are expecting their third children, during the Golden Globe 2018

Anna and Hugh welcomed their first child, a son John, in June 2012 and they welcomed their second child (believed to be a daughter) in December 2015.

Hugh has two more children from his previous relationship with Tinglan Hong, a son, Felix, born in 2011, and a daughter Tabitha, born in 2012.