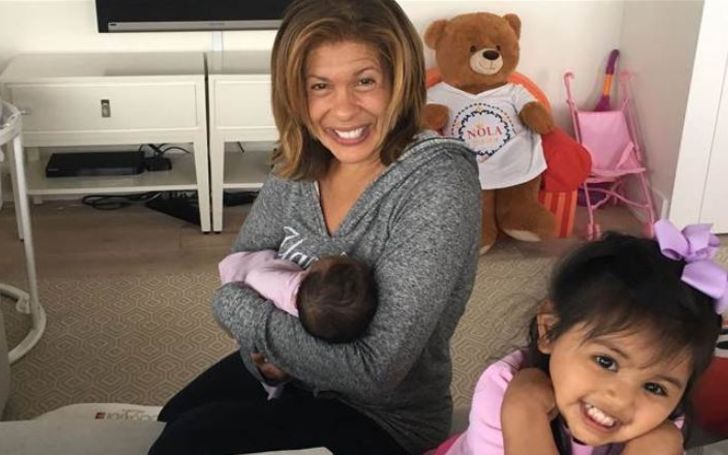 Hoda Kotb Welcomed Her Second Child As a Baby Girl Through Adoption.

The American Broadcaster, Hoda Kotb added a new member to her family. On April 16, she surprised everyone after she revealed the news of welcoming her second child through adoption. Her second child is a baby girl whom she named Hope Catherine Kotb.

Well, the 54 years old journalist, announced the exciting news on Tuesday morning through her phone call to the TODAY Show.

Some very happy news from our @hodakotb – she’s adopted another baby girl!

And she has the sweetest name. pic.twitter.com/Niss1aFG5u

It’s a girl! It’s a girl. I can’t believe that I’m here! I’m so happy to be here. You think that you’re full… and Joel [Schiffman] and I were standing there when they hand you the baby and it’s the closest thing you’ll get to a live birth,” she recounted. “It’s amazing. I can’t believe it’s happening!

Hoda Kotb also shared that her boyfriend, Joel Schiffman broke down into tears with happiness after seeing his new daughter.

In addition, she said,

I can’t imagine any of this happening. We hoped and prayed about this.

The pair who started dating since 2016 also adopted a baby girl Haley Joy Kotb in February 2017. The TV host also told the Today show her first daughter's reaction after getting a new sister. She said that,

Haley was trying to feed her her raspberries and I was like, 'Not yet, babe'.

Congratulations are in order for @hodakotb, who adopted a second little girl, Hope Catherine, this week. Link in bio.

Congratulation to Hoda Kotb and his partner, Joel Schiffman!!!