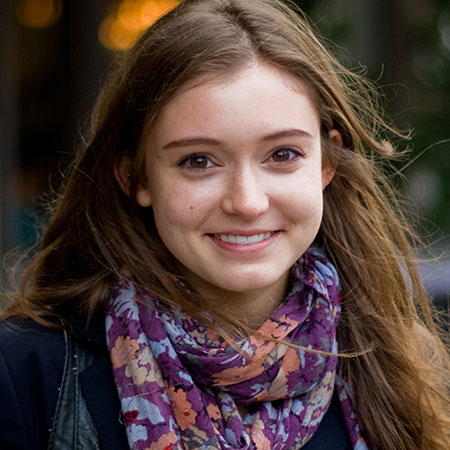 Hayley McFarland is an American actress who has earned success in a short period of time. She is known for her appearances in An American Crime as Jennie Likens (2007), Lie to Me as Emily Lightman (2009-2011), The Conjuring as Nancy (2013), Sons of Anarchy as Brooke Putner (2013-2014). Further, she is also a singer and dancer.

Hayley McFarland was born on 29th March 1991 in Oklahoma, U.S., under the birth sign Aries. She belongs to white-American ethnicity and holds an American nationality. Her parents raised her in  Edmond, Oklahoma but later on moved to Burbank, California.

Further information regarding her parents and family background are not revealed.

Since her childhood days, she was interested in acting and has performed in several musical theaters including Titanic and Fiddler on the Roof. Later, McFarland joined the ACTS Acting Academy of Michelle De Long to pursue her acting career.

Started Acting Career At the Age Of 15

McFarland made her debut in television, appearing in an episode of 2006 American dramedy television series, Gilmore Girls as Marcia. The following years, her entry in Hollywood with the American crime drama film, An American Crime, where she played as Jennifer Faye "Jenny” Likens.

After that, she has a supportive role in the number of TV series such as ER, Pushing Daisies,
United States of Tara, Without a Trace, and many others. Notably, McFarland also has outstanding performances in movies such as Winged Creatures, The Conjuring, and The Chaplain among others.

Further, McFarland came into the limelight following her lead role Emily Lightman in American crime drama television series, Lie to Me from 2009 to 2011. She was cast along with Monica Raymund, Mekhi Phifer, Michael B. Jordan, and others.

Sons of Anarchy is an American crime tragedy television series, where she appeared as a guest role in the 6th season and also has a recurring role in the 7th season. The series' casts are Charlie Hunnam, Katey Sagal, Tommy Flanagan, and many more.

Hayley McFarland gained popularity in a very short period of time and made her notable appearances in the number of hit movies as well as television series. Since fame comes along with wealth, how much do you think is her total net worth?

Well, according to the celebrity net worth, she has an estimated net worth of $3 million, as of 2019. Moreover, it is reported the average salary of an actress is about $50,326 with a median bonus of $1,005.

It has been reported that the actress owns a house in Los Angeles. The average price of the house in LA is over $800k.

The 5 feet 2 inches tall, Hayley McFarland is possibly living a single life as she has kept her lifestyle as well as her relationship status (boyfriend and dating life) quite secret from the media.

Previously, she dated a guy named Eric Boshart, however, there is no detail information regarding their relationship. They were last seen on March 28, 2016, when they went to Santa Barbara for wine tasting.

Since then she has not been seen with any guy and also has not been linked romantically with anyone. Well, she might be keeping her personal life away from the bay.

Besides, the actress is an avid animal lover who has two dogs and one black colored cat.

check out the short interview of Hayley McFarland: