Hayley LeBlanc is a social media star who is famous among her YouTube channel as well as on the Instagram platform. The 12 yaers old Youtuber who is a very perfect gymnast has more than 1.53 million subscribers in her YouTube Channel and 3.7 million followers on her Instagram. Most of her content on the YouTube channel is related to her gymnast, cooking, and everyday adventure as well.

Hayley LeBlanc was born as Hayley Noelle LeBlanc on September 2, 2008, in Katy, Texas. She is the daughter of Billy LeBlanc and Katie LeBlanc with whom she resides in Maryland. She has a sister named Annie LeBlanc who is also a gymnast and her elder brother, Caleb LeBlanc died at the age of 13 due to hypertrophic cardiomyopathy. 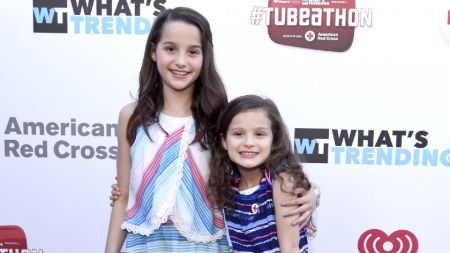 CAPTION: Hayley LeBlanc with her sister SOURCE: The List

Well, Hayley LeBlanc was homeschooled along with her siblings. As of now, she goes to private school, Indian Creek as she also wanted to go to school with her other gymnast friend.

Did You Know? She has poor eyesight and gone through eye surgery.

How Did She Start Her Career As a YouTuber?

The YouTube channel Bratayleys was made in 2008 for Hayley as it is the combination of (brat + Hayley) by her parents. On the other hand, they created the channel 'acroanna' for Annie and "FlimsyArrow" for Caleb. The channel also sometimes feature Hayley's siblings. Later on, the channel gained huge popularity so that it became the official channel for the whole family and they even adopted Bratayley as their web surname.

What Made Her So Special and Famous?

As we have already mentioned above, Hayley LeBlanc was homeschooled which enabled her parents to record most of the daily activities. Also, thier perfect presentation of the vlogging has to help thier channel to remain in the trend these days.

The 12 years old, Hayley has learned so much skill of gymnastics as she can do a cartwheel, handstand, roundoff, kick-over, and so on. Even at such a young age, she has high skills in gymnastics and has even got the highest score of 9.0 on a flooring event.

Apart from her gymnastic skills, some she also can ben seen sharing content related to her cooking. Mostly she uses to make cupcakes for her close one's birthday. Once she has mentioned that, she wants to be a chef after she grows up.