Harry Richardson is a famous Australian actor widely known for appearing in the role of Frank Gresham in Doctor Thorne. The 28 years old actor started his professional acting career in 2015 and has worked in a handful of movies and television series.

Harry was born on 13th March 1993 and is currently 28 years old. He was born in Sydney, Australia, and belongs to Australian nationality. He moved to London when he was two; however, he again returned to Australia at twelve.

Harry studied at Sydney Grammar School after returning to Australia. He again returned to the UK at eighteen years old. He then attended the Royal Academy of Dramatic Art in London. Later, he got enrolled at the Western Australian Academy of Performing Arts.

Harry has appeared in movies like Dunkirk and I’ve Been Thinking About What You Look Like. Similarly, he has worked in television series like Poldark, Death in Paradise, Total Control, and The Gilded Age.

The actor has also worked in plays like Suddenly Last Summer, The Golden Age, No Worries, Hour of the Wolf, Festen, Arturo Ui, Chekhov in Yalta, As You Like It, Great Expectations, and many others.

Harry Richardson’s Net Worth In 2021

It has not been long since Harry started his professional career, but with incredible acting skills, he has won the hearts of many. As of 2021, he is worth $800 thousand. No doubt, his main source of income is his acting career.

As per sources, he earns an average salary of $15 thousand to $25 thousand per episode on the show.

Who Is Harry Richardson Dating?

Talking about Harry’s current relationship status, the actor has not tied the knot. However, he is reported to be not single. The actor is said to be in a relationship with new beau Juliet Doherty, an American dancer. 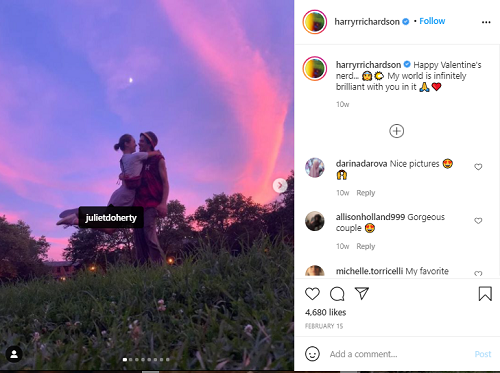 It is not clear when and how the pair started dating, but they started uploading pictures publicly in October 2020. The duo often posts pictures of each other on their respective social media accounts.

Before dating current girlfriend, Harry was in a relationship with Eleanor Tomlinson. They dated for around a year before breaking up. The former couple first met on the set of Poldark in 2015 and soon later started dating. They broke up in the summer of 2018.