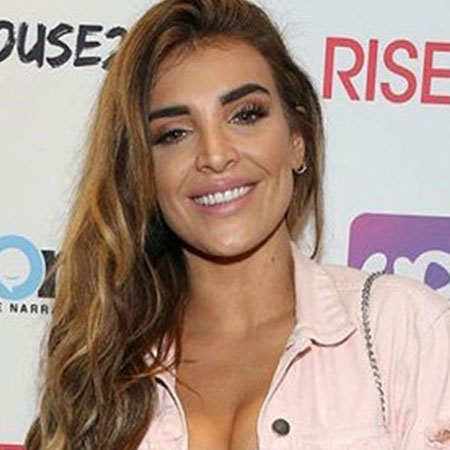 Multi-talented American singer, actress as well as a designer Hana Giraldo is the founder of her vintage fashion line RiptLA. She is well-known for being the daughter of Hollywood famous stars, Pat Benatar and Neil Giraldo.

Hana Giraldo was born on 12th March 1994 in the United States of America, under the birth sign Pisces. She is of American nationality and belongs to the white-American ethnicity/race.

She is the daughter of Neil Giraldo, a film score writer, and Pat Benatar, a vocalist, and musician. Her grandparents are Andrew Andrzejewski and Mildred Knapp. Giraldo has an older sister, Haley Giraldo who is an Instagram personality and model.

While she was in her 5th grade, he finally moved to Hawaii where she was bullied by her classmate.

Since her early days, she was interested in fashion and always wanted to pursue her career it. And with her hard work, struggle and passion she made it true.

Talking about her career, she has appeared in several comedy videos along with popular Social media star Lele Pons. In April 2017, she was featured in a video entitled When you save numbers by a description along with Madison Perrin.

Likewise, she also made her appearances in some other music videos as well that includes What did I get myself into, Helping your friend make their ex jealous,

Featured Kyle Massey in her songs

When your Boyfriend can’t say no, What we do in our free time, Long Nail Problems, When your friends are bilingual, and many more.

In addition, she featured Kyle Massey on her songs 2 HIts and Tote - Gimme that Bass. Along with this, Giraldo is also a founder of her own vintage fashion line called RiptLA based in Los Angeles. The fashion line makes vintage custom-designed clothing.

Hana Giraldo is currently 24 years old. Giraldo might have a net worth in the thousands, but her exact net worth is still under the radar. She earns a decent amount of money from her career as an actress, singer, and fashion designer.

Moreover, her parents are well-known media personalities, who have a combined net worth of $37 million. Her mother Pat Benatar's net worth is reported to be around $32 million while her father Neil Giraldo's net worth is estimated at around $5 million.

Hana Giraldo is in a relationship with That’s So Raven actor Kyle Massey. The pair have already made their relationship official with their red carpet appearance together. The lovebirds are frequently spotted together in public places.

Hana also expresses her love for her beau on her social media where she frequently shares the couple's photos. On 28 August 2018,

Happy bday Kyle, words cannot describe how much I love you. You are my love and My best friend! My everything ! You mean so much to me. Love u to the moon and back. Love u love u love u baby. HAPPY FUCKING BIRTHDAY

Apart from her relationship with Massey, she shares a good bond with actor Kevin McNamara and they often collaborate on their prank videos which Hana posts on her Instagram. As of now, she lives in Los Angeles, California, U.S.A.