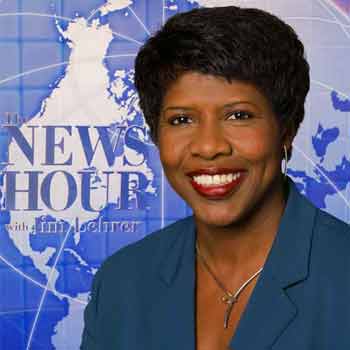 Peabody Award-Winning American journalist Gwendolyn L. Ifill, popular as Gwen Ifill was a moderator and managing editor of Washington Week. She became the first woman of African descent to host a nationally televised U.S. public affairs program with Washington Week in Review. She worked actively for the 'Washinton Week' until her death. She also worked as a co-anchor and co-managing editor of the PBS News Hour which airs on PBS. She was a political analyst and had moderated on the 2004 and 2008 vice-presidential debates. She was a newscaster as well as an author. She has authored the best-selling book The Breakthrough: Politics and Race in the Age of Obama.

Gwen Ifill died on November 14, 2016, at the age of 61. The cause of her death was breast and endometrial cancer.

Gwen Ifill was born Gwendolyn L. Ifill on September 29, 1955, in the Queens neighborhood of Jamaica in New York City. Ifill was the daughter of the African Methodist Episcopal minister Oliver Urcille Ifill Sr. and Eleanor Ifill. She had four siblings  Earle Ifill, Roberto Ifill, Oliver Ifill Jr., and  Maria Phillip Ifill. Gwen's family had emigrated from Panama to States. She was American as per nationality and belonging to African American ethnicity.

Her father’s ministry made her family live in several cities throughout her youth. When she was young, she lived in Pennsylvania and Massachusetts church parsonages and subsidized housing in Buffalo and New York City.

In 1977, Gwen graduated with a Bachelor of Arts in communications from Simmons College located in Boston. As she always wanted to express her feelings in public, she wanted to have her career in journalism. Following her target and dream, she continued on her journey to find a career in this field.

While at the college, Gwen had interned for the Boston Herald-American. After her graduation, she was hired there but she had to be embarrassed as one of her co-workers had handed her a note writing words of humiliation as she was a Black America “Nigger go home.”

In October 1999, Gwen Ifill worked at the PBS program Washington Week in Review as its moderator and also been the senior correspondent for PBS Newshour. She also appeared in several shows like Meet the Press.

She also served on the board of the Museum of Television and Radio, Harvard Institute of Politics,  the Committee to Protect Journalists, and the University of Maryland’s Philip Merrill College of Journalism. Since 2013, she has worked as the co-anchor and co-managing editor for NewsHour.

She had been one of the legends in journalism with her background and struggles to keep at this stage. She spent more than 2 decades in this field experiencing and learning things and alongside being the inspiration to the newcomers.

As an author, Gwen Ifill wrote a book titled “The Breakthrough: Politics and Race in the Age of Obama.” The book was published in the year 2009 January 20 which deals with several African American politicians including Barack Obama, Massachusetts' Governor Deval Patrick, and Newark New Jersey Mayor Cory Booker. Concerning the vice-presidential debates, she won a lot of recognition and praise for her performance and made her popular in the journalism arena.

Gwen Ifill had a pleasing personality and command in her speech and writings.  She was one of the admired and reputed journalists. She had a net worth of $5 million and enjoyed a very handsome salary pay.

Gwen had a certain determination as she was a very ambitious person.  She was an asset to where she works. Gwen used to work with such enthusiasm and energy like in the youth even when she was about to the age of being retired.

A lot of information on her can be extracted from her biography available on different internet sites as well as articles written on her. She can also be followed on Twitter.

Talking about her personal life, she never married so, had no son and daughter. Also regarding her relationships and affairs, boyfriends, there are no such rumors or news disclosed. When she was asked about the marriage, she told,

Gwen spoke about getting married and had even been told that she would get married when the time comes but never got time. She kept herself busy on her professional life which might be the reason behind her being unmarried.

Gwen Ifill died at the age of 61 on November 14, 2016, in Washington D.C. The cause of her death was believed to be breast and endometrial cancer. As per the reports by CNN, the legend spent her last moment at a Washington, D.C. hospice surrounded by her family and friends.

Many famous personalities expressed their condolence. Former US president, Barack Obama is one of those who extended his condolence to her family.  He says,

''always appreciated [her] reporting even when [he] was at the receiving end of one of her tough interviews.''

Many other personalities like Michelle Obama and Paul Ryan also expressed their condolence.

On November 14, the PBS NewsHour "devote[d] our show to Gwen Ifill, who died that Monday after a battle with cancer," and suspended all but a token moment of daily news to pay tribute. During the course of the week, this developed into series of tributes on various NewsHours as "Remembering Gwen."