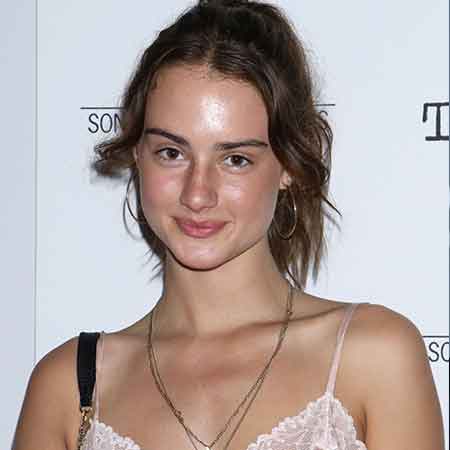 Grace Van Patten is a popular American actress who is recognized for her appearances in the movies distributed by Netflix: Tramps (2016) and The Meyerowitz Stories (2017). She is also famous for being the daughter of the famous director as well as producer Timothy Van Patten who has directed episodes of Boardwalk Empire, Deadwood, Game of Thrones, Sex and the City, The Sopranos and The Wire.

Grace Van Patten was born on 1996/1997 in New York City, New York, U.S. She is the eldest daughter of three children of director and producer Timothy Van Patten and former model Wendy Rossmeyer Van Patten. She is the niece of comic actor Dick Van Patten.

She grew up in Tribeca, New York City. In her childhood, she was a self-described tomboy and used to play volleyball and basketball. She owned a mini chopper at a young age; her grandfather, Bruce Rossmeyer, owned several Harley Davidson dealerships that are now run by her mother.

She graduated from the Fiorello H. LaGuardia High School of Music & Art and Performing Arts in New York City.

At the age of 8, Van Patten got her first role on the crime drama television series, The Sopranos under the direction of his own father. She portrayed the role of Ally, the daughter of a gangster Eugene Pontecorvo.

After seven years, she starred in the series Law & Order: Special Victims Unit where she portrayed the role of Jodie Lanier. On the following year, she appeared in the series Boardwalk Empire.

Patten made her debut in 2015 in the movie Stealing Cars. In the following year, 2016 she appeared in the movie Tramps as Ellie. Similarly, in 2017 she starred in three movies including horror thriller Central Park, comedy-drama film The Meyerowitz Stories (New and Selected) and romantic comedy movie The Wilde Wedding. These movies helped her to showcase her versatility.

As of 2018, she appeared in Under the Silver Lake, American neo-noir film written and directed by David Robert Mitchell alongside Andrew Garfield, Riley Keough. Her upcoming projects are The Violent Heart and Good Posture.

Grace Van Patten earns a decent amount of money from her professional career. However, her net worth and salary are not revealed. It is still under review, however, we can assume that her net worth is in six-figure digits.  Grace's father Mr. Patten has a net worth of around $10 million.

Patten is leading a low-key personal life and nothing much is known about her relationship and dating life. She, however, has been spotted with Nat Wolff on a romantic trip to Sardinia. Wolff is famous for his role in The Naked Brothers Band.

While the couple is yet to speak publicly about their romance, Patten has shared pictures of the pair on her Instagram page. She is reportedly dating  Hair & Accessory Designer John Nollet. The rumors of their dating came to the public after she posted an intimate photo along with him on her Instagram account on June 3. But they have not confirmed.

As of now, the actress is living a happy life with her family in Cobble Hill, Brooklyn. She is active on Instagram with more than 21.3K followers as of November 2018. She has also two pet dogs.

Check out her video: