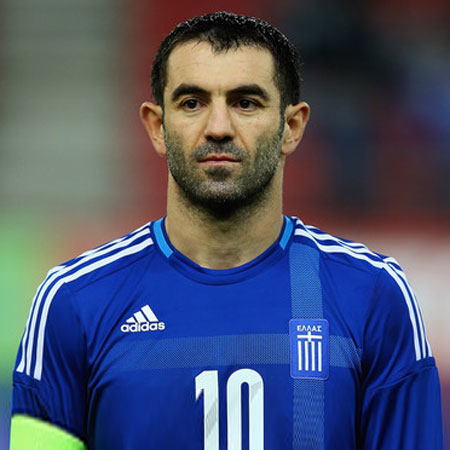 Georgios Karagounis is the Greek Professional footballer who plays as a midfielder from the current team English Club Fulham wearing jersey No.14 and from the Greece National Football Team. Georgios Karagounis was born in the year 1977 March 6 at Pygros, Greece. He cherishes the height of 176 cm and body weight of 74 kg. He was born and brought up in Greece where he finished his schooling at. After signing the contract with Fulham, he began to reside at the Thames-side flat making him neighbors to Manchester United’s midfielder Juan Mata and Chelsean midfielder Oscar. He is a married man having two children, a son and a daughter. Beside this, there is no any disclosed information available on his personal life.

In 1993, Georgios began his youth career joining at Panathinaikos. After 3 years at Panathinaikos, in 1996 he debut his professional career signing with Appollon Smyrni. He appeared in 55 matches bagging 9 goals from the team. After two seasons with Apollon, Georgios signed with Panathinaikos, where he bagen his youth career. After spending 5 years with Panathinaikos, appearing in 188 matches with 25 goals, he joined to Italian Serie A Club Internazionale. He had disappointing seasons at Internazionale making him move to Portugal Club Benfica. He had an excellent start with this club. He appeared in 45 matches from this club bagging 3 goals.

After two seasons with Benfica, Georgios Karagounis returned to Greece singing with Panathinaikos again where he performed fantastically in 133 matches scoring 16 goals. Since 2012, he is playing from the team of English Club Fulham. He has appeared in 39 matches with a goal so far. Accordint to Salary statistic record, his current salary with Fulham is 6.17.400 Euros annually. Prosport International is his agent who claims his market value or worth 1.000.000 Euros. He is in the first team of National Football Team of Greece since 1999. He has the experience of representing his nation in international football arena in 132 matches scoring 10 goals.

Giorgos Karagounis is a central midfielder who is bit of less height but is popular for his tough and gritty play in the field. Due to his superb performance and work rate, he is compared to one of the best football player in the Greek Football history, “The General”, Mimis Domazos. Georgios Karagounis is skilled when it comes to dribble the ball. He is well known in creative passing with the accuracy in long passes. Georgios Karagounis is described as a “dogged worker in the midfield and a deliverer of fine set plays.” Besides, the excellent passing, his headers, shooting and tackling skills is to be praiseworthy. He has got good speed, stamina and strength in the game that keeps his durability. He is one of the best players that Greece has got at present time in itsNational Football Team.