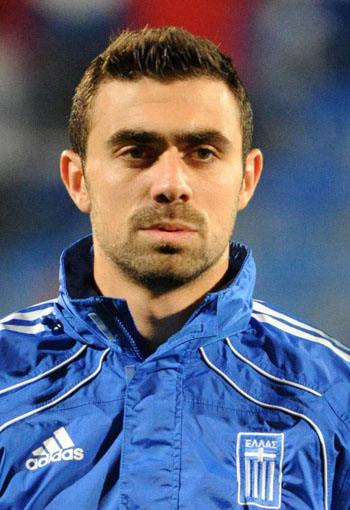 A Greek Footballer, Ioannis “Giannis” Maniatis was born in the year 1986 October 12 at Livadeia, Greece. This 27 year old football player owns the height of 178 cm and body weight of 68 Kg. He was born and brought up in Greece. He is playing as a defensive midfielder from the centre as well as can play as Defender from the right side in the pitch from his Current Team from the Club Olympiacos and the Greece National Football Team. There is no other information regarding the personal life of this player which include his relationship information as well.

Giannis Maniatis started his youth career from Parnassos Arachova. In 2002, he moved to AO Thiva. While finishing his youth career with AO Thiva, he caught the eye of the scouts. Later in 2003, he joined with Panionios and made his debut for the “Kyanerythri”. Then he became the integral part of the first team. After the end of his contract with Panionios, he was eyed on by the three big Greek Clubs named, AEK Athens, Olympiacos and Panathinaikos. However, he elongated the four year contract with Panionios. Giannis Maniatis has appeared in 164 games from the team scoring 8 goals.

After the end of the contract with Panionios, he joined with the Olympiacos in 2011. He is playing in the Current Team of Olympiacos as a Defensive Midfielder wearing squad No.2. Giannis Maniatis is in this club since more than 3 years and has appeared in 84 matches bagging 6 goals for the team so far. Also, Giannis Maniatis is in the team of Greece National Football Team since 2010. He debut in this team as substitute. He has appeared in 28 matches from the team representing his Nation Greece. Giannis Maniatis has the experience of playing in Greece under 21 National Football Team in the year 2006 where he appeared in 14 matches scoring a goal. The Salary statistical record of Giannis Maniatis is not available so far. However, the player’s agent ACE Management claims the amount of 4.000.000 Euros as his market value.

Giannis Maniatis is a right footed defensive midfielder who also plays as a right back/Defender in the pitch. He is good at tackling so dives into tackles. He is good at blocking the ball as well. This 28 year old player is an energetic and enthusiastic one having good speed and stamina in the game keeping his durability in the game. He is skilled in marking and passing the ball. It is said that his international reputation is not so good. The overall rating at his reputation is given 1. However, his performance and work rate is considered to be satisfactory. He is active in social media as well. One can follow and add Giannis Maniatis in facebook as well as twitter accounts.