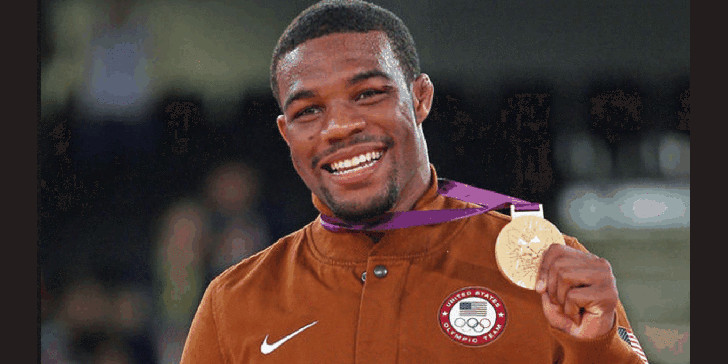 American World and Olympics champion in freestyle wrestling, Jordan Burroughs has a dream to win the world championship for the fourth time and become the most winning wrestler in the American History. While he is already a third most winning wrestler after winning his third world title in 2015, he has also become one of the favorites to win a gold medal in Rio Olympics for the second time in 2016.

The 2012 Olympics gold medalist Jordon is not going to be the same person like before, rather he will be stronger and smarter. This year, his tough competitor is Russia's Aniuar Geduev who is ranked 2nd after Jordan in world rankings.

Jordan Won the World Championship and the NCCA in Same Year

The winner of NCCA titles in 2011 after winning Kyle Drake in two matches, will wrestle on September 12 in Las Vegas, Nevada for his fourth world title. Burroughs marched forward without taking any breaks after winning his NCAA title and jumped into the world freestyle wrestling immediately and won the title on 18th September 2011 in Istanbul, Turkey.

After that victory, he became the fourth wrestler of all times to win a World Championship and a NCCA title in the same year.

He Just Kept on Winning World Titles After 2011

After he won two titles in 2011, he went with the same flow in the following year by becoming a gold medalist in 2012 Olympics. The passionate wrestler was qualified for the game at 74 kg after he defeated Andrew Howe at the trial in Lowa City, Lowa. To become a gold medalist he defeated Sadegh Saeed Goudarzi of Iraq in the finals. In 2013 he won his second World Championship title in less than a month where he broke his ankle while training. He once again made U.S. proud in 2014 finishing with a gold medal in World Championship in Tashkent, Uzbekistan.

Jordon, who considers himself a normal guy, who enjoys doing simple things in life but from our point of view he is not actually a normal person. The 28-year-old athlete who was born on 8th July 1988 in Camden, New Jersey married the love of his life Lauren Mariacher on 12th October 2013 and has two children Beacon (2 years) and Ora(2 months). Despite being a wrestler, he likes other sports too like football, lawn tennis, etc and is a big fan of Roger Federer, Lebron James, and Serena Williams.