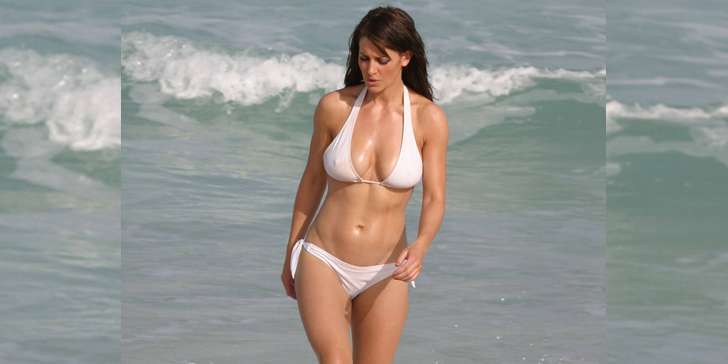 The 40-year-old Kristy Gallacher, who credits staying in shape for helping her through her divorce - showed off her washboard stomach in a black and white zipped-up swimsuit, in one revealing snap. She posed confidently with her hands behind her back and showing off her impressive cleavage and toned arms. Kirsty tied her brunette locks back into a chic ponytail and kept her makeup natural-looking for the fitness images.

Kristy talks about her relationship with Paul Simpson

In another stunning shot, she can be seen leaning onto a silver pole wearing a semi-sheer blue and black leotard and a pair of trainers.

The accompanying interview saw Kirsty open up about ending her relationship with a partner of 15 years, Paul Sampson, after five years of marriage. The couple has two sons -  Oscar 10 and five-year-old Jude together.

She told that she was quite a controlled person

Admitting that she started exercising more during the split and through her father's health problems, the presenter said, "I’m quite a controlled person and I felt like I was losing control, "Everything was very difficult, very sad – two kids in the midst of a divorce. I just thought, 'I need to put myself into something really positive and something that’s going to help me through it."

"The exercise wasn’t to do with what I looked like, it was to do with how I felt – I wanted to feel healthy, fit and able to cope with all the stress." She added: "I feel stronger now than I’ve ever felt. I’m in better shape." Kirsty previously admitted that she'd been a "different woman" since the split, in August 2014.

She explained: "It's not in a vain way, but more positive focus. I feel like a different woman. It's not been easy, but I do feel like I've turned a corner. I don't mind putting a bikini on, I'm nothing special, but you just get on with it."