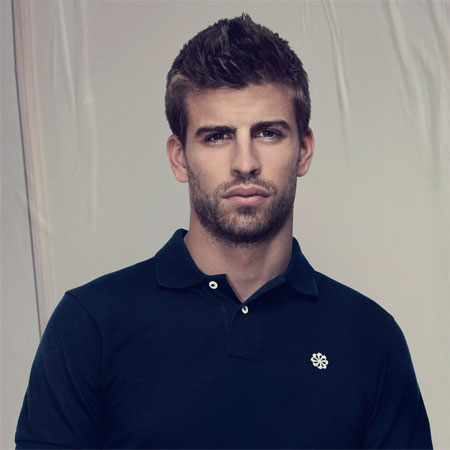 Gerard Pique is a very well known Spanish professional football player who plays for FC Barcelona  as a defender.Gerard Pique  was born on February 2, 1987 in Barcelona,Catalonia,Spain and Pique was raised in a Catalan family. His father, Joan, is a business man, and his mother, Montserrat, is the director of a prestigious spinal injuries hospital in Barcelona. He has a younger brother named Marc. His grandfather, Amador Bernabeu, is a former vice-president of FC Barcelona.

Pique’s  career began in 1997 when he entered the FC Barcelona academy. Pique practiced in the Catalan club academy for seven years. Also Gerard was among main defenders of the club’s youth team. In 2004, he got an offer from Manchester United FC to enter their academy as the young talent actually matched the game style cultivated by the English club.Pique  practiced in the Manchester United FC academy in between 2004-2005 and within a year he proved himself well enough to join the first team’s main squad.In 2004, Gerard was offered his first ever professional contract with Manchester United FC. Pique did not hesitate to accept the very promising offer by the English club and already in the 2004/05 season he was one of the club’s first team players. In 2006, the player was loaned to Real Zaragoza where Gerard played throughout the 2006/07 season. He played 22 matches and spent most of the time on the bench.The loan over, Pique returned to the English club only to continue practicing as a place in the main squad was unattainable for him.However, in 2008, things changed for the better. Gerard got an offer from FC Barcelona and it became a turning point in his career. The club signed a long-term contract with the player according to which Pique has played for the club till present day. Since 2008 Gerard has played in over 200 matches for the club.In 2002-2008, Gerard played 40 matches for the Spain youth national teams ranging from U-16 to U-21. Since 2009 Pique has been capped for the Spain national team. He is the UEFA Euro 2012 and the 2010 FIFA World Cup winner.

Gerard reportedly dated Welsh actress Lisa Lazarus during the time when he was playing for Manchester United.  However, the relationship ended after Man U traded him to FC Barcelona in 2008. A picture of Gerard and Nuria Tomas kissing on Grecian beach hit the press in 2009 and specualtions started to take place till they came out as an official couple. But this relationship didn’t last as well. Since spring 2010, Pique has been in a relationship with the Colombian singer Shakira who is ten years older than him. The couple met during the making of music video for Shakira's song "Waka Waka (This Time for Africa)" which was also the official song of the 2010 FIFA World Cup. On March 2011 Shakira officially confirmed the relationship via Twitter and Facebook.  She posted a picture of her and Gerard with a caption in Spanish reading, "I present to you my sunshine”. The couple had their first baby Milan Pique Mebarak on 22 January 2013 in Barcelona, Spain. Milan weighed approximately 6 pounds, 6 ounces at birth.

When Gerrard was in the Manchester United,he had given a marvelous contribution to lift up Premier League,Fa Community Shield and UEFA Champions League in 2007-08,2007 and 2007-08 respectively. Current Team of Gerrard Pique i.e. Barcelona has lifted a  trophy of La Liga,UEFA Champions League,UEFA Super Cup and FIFA Club World Cup.His hardwork and continuous effort led Spain to achieve the winner position in 2010 FIFA World Cup.He has been honoured with the La Liga Breakthrough Player of the Year in 2009 and La Liga Best Defender in 2010.He has already achieved a most appreciable honour i.e. Gold Medal of the Royal Order of Sporting Merit in2011. Pique falls under the group of  three who have represented two different clubs that have won the Champions League two years in a row. Other two being  Marcel Desailly (Marseille and AC Milan) and Paulo Sousa (Juventus and Borussia Dortmund). Gerard's annual salary is 3.96 million Euros. His market value is worth 36,000,000 Euros.