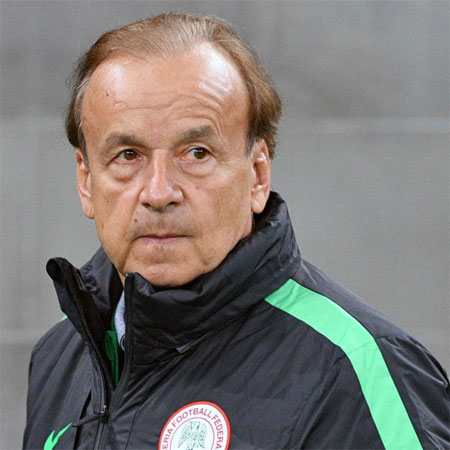 Gernot Rohr is a German manager who started his managerial career working with French football club Girondins Bordeaux, in 1996. He then worked as a manager of Niger national football team and as the head coach of the Ligue 2 team FC Nantes. He also works as a technical adviser of the Super Eagles under the control of the Nigeria Football Federation.

Rohr is a former footballer who spent most of his football career playing with the French professional football club Bordeaux as a defender. He is also a former team member of Bayern Munich, SV Waldhof Mannheim, and Kickers Offenbach.

Gernot Rohr was born on June 18, 1953, in Mannheim, West Germany. He is the son of Philipp Rohr, a former German football player. He holds German nationality and regarding his ethnicity, he is Caucasian. He was raised in his hometown Mannheim and was highly involved in sports since his early childhood days.

Rohr started his professional football career playing with the French football club Bayern Munich as a defender, in 1972. His two-year career with the club ended up without scoring any goals in six matches. And in the same year, he joined SV Waldhof Mannheim and also scored his first goal for the club.

After playing for a year with the club, Rohr went on to play with the German association football club Kickers Offenbach in 1975. In 1977, the French club Bordeaux signed him where he played over 360 matches scoring 13 goals until his retirement in 1989.

After his illustrious career in which he played more than 400 games, Rohr made his transition into the field of management and joined his last club Girondins Bordeaux as their manager. He helped them to reach the UEFA Cup final although they lost to Bayern in the final, in 1996.

Rohr also worked as the sports director of German football club Eintracht Frankfurt from October 1998 until April 1999. He later managed Tunisian club Etoile du Shel for a year from 2008 to 2009. However, the club fired him following a third-place finish in the league, outside of the 2010 CAF Champion League places, on 15 May 2009.

In the same year of June, Rohr became the new head coach of the Ligue 2 team FC Nates and signed a contract with the club for a couple of years. But he was fired by the club was replaced by Jean-Marc Furlan at the end of the year. The following year, he was named coach of the Gabon national football team.

As a Nigerian coach, Rohr won his first game defeating Tanzania by a lone goal in Uyo. He didn’t win his first match after South Africa defeated Nigeria in a 2-0 home match. He helped his team to become the first African side to qualify for the 2018 FIFA World Cup after a 1-0 victory over Zambia, on 7th October 2017.

According to some reliable online sources, the German manager Rohr has garnered a tremendous amount of net worth which is believed to be more than $1.5 million. And as a Super Eagles coach Rohr’s estimated monthly salary is around $50,000.

Gernot Rohr prefers to keep his personal life far from the social networking sites. According to his social media, he is a married man but he is yet to reveal his wife’s name. He also has two children named Oscar Rohr and Emmanuel Rohr. He currently resides in Frankfurt, Germany along with his family.