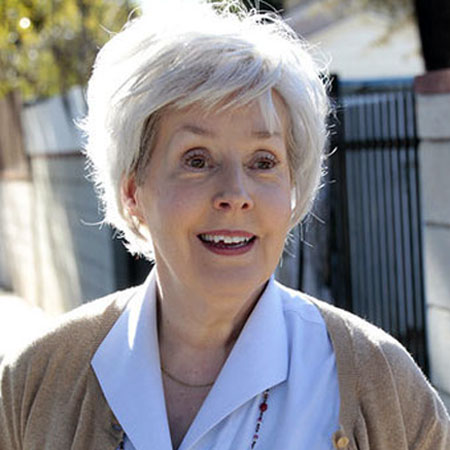 Georgia Engel is an American actress, well known for portraying Georgette Franklin Baxter on the American sitcom, The Mary Tyler Moore Show. She is also known for her role in Open Season and Grown Ups 2.

Georgia Engel was born as Georgia Bright Engel on 28th July 1948 in Washington, D.C., United States of America. She belongs to white ethnicity and holds an American nationality.

Engel is born to Ruth Caroline and Benjamin Franklin Engel, who was a Coast Guard admiral. She grew up with her sister Robin Ruth Engel who was Miss Hawaii in 1967.

Engel went to the Kodiak Island Borough School District, and Walter Johnson High School as well as the Academy of the Washington Ballet for her high school education.

Engel also obtained her college degree from the University of Hawaii at Manoa.

Georgia Engel began her career working for musical production, American Light Opera Company. She made her debut in the Broadway production ‘Hello, Dolly!’ in 1964.

Engel‘s breakthrough performance in Mary Tyler Moore Show as Georgette Franklin Baxter in 1972.  She then got an opportunity to play in 1980 sitcoms 'Goodtime Girls' and 'Jennifer Slept Here.

Engle also played a recurring role in Coach and featured in The Cares Bears Movies as the voice of Love-a-lot Bear in 1985. Her fame rose to prominence level when she made her appearance in Everybody Loves Raymond as Pat MacDougall.

She also appeared in other TV- movies including, The Day the Women Got Even in 1980, The Sweetest Thing in 2002, and A Love Affair: The Eleanor and Lou Gehrig Story in 1978.

Likewise, she gave her incredible performance in various Television series, films, as well as Theatre. It’s been more than four decades and her mesmerizing work is still praised in the industry. She has given her full pa s sion and dedication to her work. In 2012, he was a cast in The Office.

Engel starred in the new musical Gotta Dance, which was premiered at the Bank of America Theatre, Chicago on December 13, 2015, running through January 2016. The cast also stars Lillias White, Stefanie Powers, and Andre DeShields.

Georgia Engel's Net Worth And Salary

Georgia Engel has earned a huge amount of net worth from her successful career as an actress. Her current net worth is around $8 million, as per celebrity net worth.

In 2013, the actress played the role in the movie Grown Ups 2 which became the quiet hit at the box office grossing roughly $247 million on an $80 million budget. IIn the movie, she shared the screen along with Kevin James, Chris Rock, and David Spade.

The 70-year-old gorgeous actress Engel is still a single woman. While she was young she must have made a few boyfriends but the news about her affairs never surfaced in the media due to her secretive nature.

Now also Engel has kept quiet regarding her affairs. Even though she hasn’t revealed much about her personal life, she has made it clear that love and affairs are not her cups of tea.