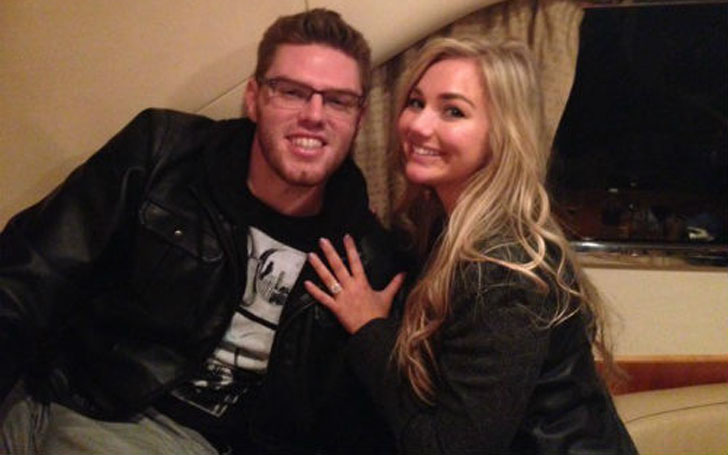 Atlanta Braves player Freddie Freeman is currently at the top of his career, and it will not be wrong if we say his wife Chelsea Goff who stood behind him all this time is a source of the inspiration for American-Canadian professional baseball player.

Freeman and Goff who tied the knot in 2014 recently celebrated their five wedding anniversary. We have some exclusive details about their married life. How their married lie is going on at present; are they happy with each other?

Chelsea Goff and Freddie Freema are currently living their five years of blissful married life. The couple said 'I Do' in 2014, and most recently they celebrated their third wedding anniversary.

The  30-year-old MLB star took to Twitter to wish his other half on the special occasion. To make the moment more special, he featured a throwback snap of their wedding day where they appeared kissing each other.

He then left a cute message:

Freeman is a loving and caring husband, and he seems to be madly in love with his wife. The couple is blessed with a baby boy, Frederick Charles "Charlie" II, whom they welcomed in September 2016.

The proud parents recently celebrated the first birthday of their baby boy. They chose a "Chocolate Factory" theme to make their boy's first birthday special.

Goff and Freeman have a happy family of four including their cute little cat, Nala. They usually share pictures of Nala on their Twitter. Goff and Freeman, indeed have a wonderful family.

Their Beautiful Love Story; How It All Started?

Goff met her future husband, Freeman during her college days. According to some source, the couple started dating in 2011. After a year and a half, she moved to Atlanta from Florida and started living with Freddie and ever since they are inseparable.

Goff got a proper job in Atlanta, and also her then-boyfriend Freeman was introduced as an upcoming star in the MLB as he signed an 8-year,  $135 million worth contract.

Freddie Freema's shared a snap of him kissing his then-girlfriend, Chelsea Goff who is flashing her engagement ring

Soon after the contract, Freeman proposed his model girlfriend in January 2014 in a very romantic way on a boat. The MLB star took to Twitter to announced the big news on 20 January 2014 with a snap of him kissing his then-to-be wife.

He then expressed his excitement saying:

Eventually, the pair became husband and wife in November of the same year. Goff and Freeman said "I do" in a wedding ceremony held in Florida at the St. Regis Bal Harbour.

Some of the moments of the big day were broadcasted on the television show "Say Yes to the Dress" after a few months of the wedding, in February 2015.

Freddie first came across with his future wife Chelsea while the two were still in college. They were friends for a while before their friendship sprouted into romance. The couple started dating in July of 2011. A year and a half later, his current wife Chelsea moved to Atlanta and started living with her husband. After some time, she also started a job there.

The power couple dated nearly three years before their marriage.