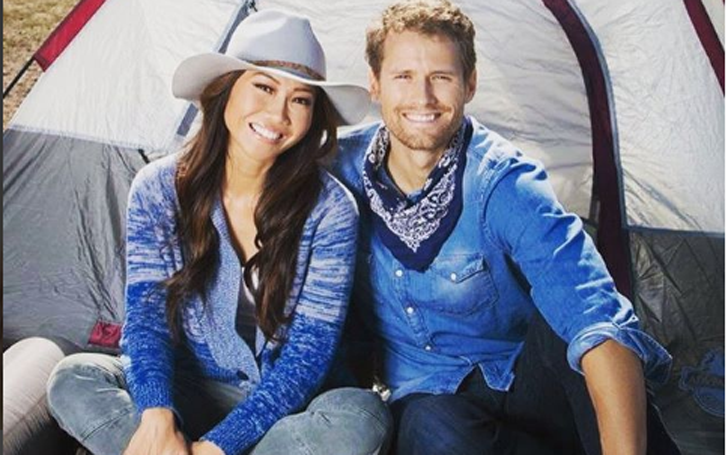 It is not easy to battle brain tumor and survive.  Among the very few cases, Good Day LA entertainment anchor Julie Chang is one. She has lived through it and survived.

Well, it would not have been easy for Chang to battle her tumor if her boyfriend, Leif Drake hadn't stood by her side.

Is Chang currently married? Did she marry her boyfriend, Leif Drake?

Who is Julie Chang's Husband?

KTTV's 'Good Day LA' entertainment presenter Julie Chang is a married woman. She is currently married to Leif Drake. Chang met her husband Drake during their high school. However, they didn't date at the time as she used to date Drake's best friend's older brother. Quite a mix!

Chang and Drake went their separate ways after high school.They were in different colleges but met again after 15 years. This time around they became more than just friends.

After dating for some time, Drake popped the question, Chang, however, rejected him since she was suffering from brain tumor. After she was diagnosed with the tumor, a doctor suggested her to have surgery which could lead to permanent blindness.

But Drake didn't left Chang in her bad days and stood for her and even moved to California to be with her. Recalling the past, Chang said:

I tried to set him free, but he wouldn't have it. He proposed right there!

The couple decided to elope a month later and exchanged vows in front of a pastor in the desert of Nevada. Soon after, Chang recovered, Drake proposed her again in December of 2013 and they got engaged again even they were already married.

Julie Chang on her wedding day

The pair officially became husband and wife on July 12, 2014. The wedding ceremony was held at Hammersky Vineyards.

The happily married couple, Chang and Drake, are currently three years into their married life. They even have a son now, he is their first child and was born in 2014. Chang's Instagram is full of beautiful moments with her husband and son.

In July 2017, the couple celebrated their third wedding anniversary. Chang shared a throwback snap of her wedding back in 2014  with a caption:

Their son started going to school recently which the proud mother quickly mentioned on her Instagram with a cute mother and son snap.

I’ve never been so sad, yet, so happy at the same time. My little man is starting school this week. I knew the day would come when I would have to share him with more people, but that day came so fast and furious!

The couple also frequently enjoys vacationing in different places. They love spending quality time together with their son. They went to a wonderful summer camp back in August 2017 after coming back from a camping trip in LA. They sure do like camping!

Julie Chang indeed has such a beautiful family.

Back in 2013, journalist Chang was diagnosed with a brain tumor following a surfing accident a few months ago. The Fox O&O announced the news with the statement:

In the next few days and weeks, the tumor will go, the hair will grow back and I will recover with the warmth you have given me since my first day here on Fox 11.

Chang then took a medical leave to get treatment for the brain tumor in November 2013; she resumed her job in January 2014.