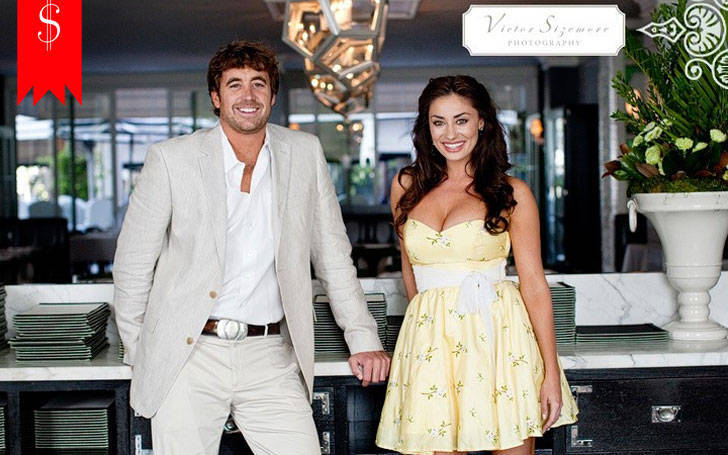 Lizzie Rovsek is an American fashion designer, television personality, and beauty pageant winner best known for her appearance on Bravo’s television show “The Real Housewives of Orange County”. Lizzie is the winner of beauty contest Miss Kentucky Teen USA in 1998 and has competed in the Miss Teen USA and Miss USA pageants.

She was also crowned Miss Kentucky USA in 2002. She is the CEO of The Sun Kitten Swimwear at current.

Lizzie Rovsek’s Net worth and source of income

Lizzie Rovsek rose to fame after being the cast member of the show “The Real Housewives of Orange County”.  She has an impressive net worth of about $25 million. She was just a junior model before her marriage.

Most of the net worth of Lizzie comes from her own business. The designer is the CEO of Sun Kitten Swimwear company founded in 2010. The company emphasizes mostly on the swimsuits for women and the signature swimsuits are equipped with the diamond from China and fabric from Italy.

Lizzie appeared on the 9th episode of the show “The Real Housewives of Orange County” and made a guest appearance in the 10th episode. She even featured in different other movies and has worked as a model and designer too. Lizzie has also been getting huge support from her husband and father which has helped her a lot to collect that enormous net worth.

Lizzie Rovsek is married to Christian Rovsek in 2009. The wedding took place at a luxurious hotel in Santa Barbara, California called Bacara Resort and Spa. Lizzie was a junior designer at a Laguna Baech Company, Tina Anderson Interior Design and the duo had affair for many years. The couple is blessed with two sons- Preston and Kingston.

Lizzie Rovsek with her husband, Christian Rovsek and their children

Lizzie’s husband, Christian is a real estate investor, philanthropist, entrepreneur, and founder of a firm, Angel Team Mortgage. He even serves as the Vice President of a company, Spirit of Liberty Foundation. It is a nonprofit company that provides employment service to veterans who are struggling.