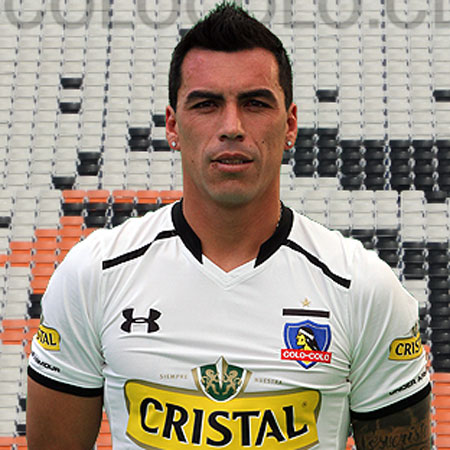 Esteban Efrain Parades Quintanilla is the name of the Chilean footballer who was born in the year 1980 August 1 at Santiago, Chile. He owns the height of 179 cm and the weight of 78 Kg. Marianella Quintanilla is the name of his mother. She is the only parents Esteban has got for having the undisclosed information on his father. He has got a sister Sibling named Solange Paredes. T

There is no history of his salary. This right footed Chilean footballer has the market value of 1.500.000 Euros The name of the player’s agent is also not disclosed. Estaban Parades plays for his current team of Chilean Club called Colo-Colo wearing the Jersey No.30 as a forward. Besides, he is also playing in the first team of the Current Team of Chile National Football Team as a talented forward.

The 33-year-old Striker started his youth career from Santiago Morning. Estaban Parades debuted in the professional field from the year 2000 from this club. Later in 2009, Santiago Morning sold him to Chilean powerhouse Club Colo-Colo with an appreciable lump of a transfer fee. During the time when he played for the team, he appeared in 107 different games bagging 51 goals for the team.

After the end of his contract at Santiago morning, Estaban Parades made his move to Chilean club Colo-Colo in the year 2009. He grabbed the experience of playing in 89 games scoring 49 goals from the Chilean powerhouse club where he remained until early 2012. In the season of 2012-2013, Estaban Parades played for Atlante.

He appeared in 29 different matches from this club making 16 goals for the team. In 2013, Esteban Parades moved to Queretaro. He played for the team for a year in 18 matches scoring 6 goals. From 2014, he again joined the Chilean powerhouse club Colo-Colo where he has played in 14 matches bagging 16 goals.

Estaban Parades is the talented player. His hard work showed up paying him the ANFP Golden Boot: 2011, Primera Divisiom Team of the year: 2009, 2011, Apertura 2012 Liga MX top scorer and Medalla Bicentenario: 2010. Besides these individual awards, he has contributed his club in achieving several awards and titles. Estaban Parades is in the first team of the Current Team of Chile National Football Team who is going to perform in 2014 FIFA World Cup as a forward representing his Nation Chile. He was in the Chile National Football Team since 2006.

He is very skilled in controlling the ball. He is appreciated in his passing and skill of giving long shots. He has got good positioning in the ball giving him the chances to score the goals. He is talented in giving the penalty shots and has good speed in the game. However, his tackling skills and aggression in the game are to be improved seemed for more successful performance in the future for his career boost.