Emmanuel Gazmey Santiago, noted as Anuel AA, is a well-established Puerto Rican rapper and vocalist whose music often includes samples and interpolations of popular songs during his early days. Besides, Santiago is considered a pioneer of the Latin trap movement. In addition, Santiago is also noted for his 2018 album Real Hasta La Muerte which contains the singles, Brindemos and Ella Quiere Beber.

His father, José, is Afro-Puerto Rican, while his mother, Nilda, was raised in Milwaukee is of White Puerto Rican descent. Meanwhile, Jose was vice president of the Puerto Rican division of Sony Music Entertainment's A&R department.

Furthermore, Santiago grew up together with his siblings, a younger brother named Leyvan and an older brother whose name is not available in the public domain. He was interested in music from an early age, and he idolized Tupac Shakur.

Anuel AA began music just at the age of 14. When he turned 18 in 2010, he started posting songs online. After he gained widespread recognition, Anuel got signed to the Latin division of Maybach Music Group. In February 2010, he released his mixtape Real Hasta La Muert, which garnered positive reviews from people. 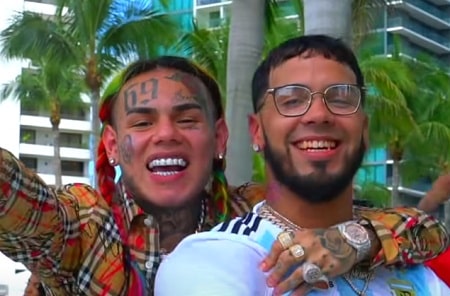 After that, Anuel landed a guest feature on Ozuna's 2017 album Odisea. On July 17, 2018, he released his debut album Real Hasta la Muerte, after the day released from jail. For your information, he was arrested in Guaynabo, Puerto Rico, in April 2016 for illegal possession of three firearms. Due to this reason, Anuel was sentenced to 30 months in federal prison.

Furthermore, the prominent Puerto Rican rapper earned his first Billboard Hot 100 hit in August 2018 via his collaboration with famous American rapper 6ix9ine on the song named Bebe. Likewise, he has worked together with various artists, including Nicki Minaj, Daddy Yankee, Karol G, Ozuna, and J Balvin.

Similarly, he collaborated with Shakira on the song Me Gusta, released in January 2020. His notable other albums are Las Leyendas Nunca Mueren, Emmanuel, and Real Hasta la Muerte.

A Divorcee & Father Of  A Son: Is Anuel Dating Now?

Currently, Anuel is reportedly in a relationship with Yailin La Más Viral. The lovebirds share snaps together on their IG account.

Earlier, the rapper dated Colombian singer Karol G. The former pair met each other for the first time in August 2018 on the music video set for their song Culpables. Moreover, they confirmed their relationship in January 2019. 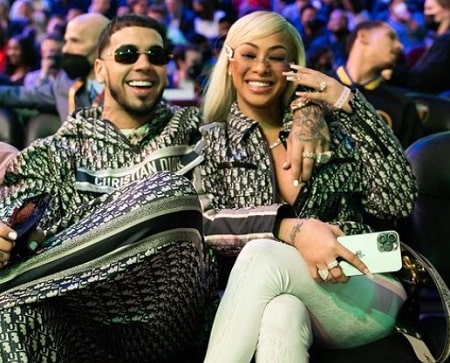 On the other hand, Karol G came to the Billboard Latin Music Awards on April 25, 2019, wearing a diamond ring & hence confirmed their engagement. But in March 2021, the two broke up after 2 years of dating.

Apart from that, Anuel is also a father of a son named Pablo Anuel. His son was born through his relationship with his former partner, Astrid Cuevas.

Anuel AA's Net Worth Is In Millions

The multiple-times award-winning rapper has made a mark in the entertainment industry. As of 2022, Anuel holds a ma s sive net worth of around $8 million, thanks to his long-term profession as a rapper. He has also done various tours in different places that must have boosted his wealth significantly.

In addition, the average salary of a rapper in the United States ranges from $18,720 to $141,440, with a median salary of $49,920. Apart from music, Anuel indeed makes a good profit from sponsorship and endorsement deals. Also, he has a strong presence on Instagram, where he has gained over 27.6 million followers.

According to the Influencer Marketing Hub, Anuel's has the potential of earning $54,845 - $91,408 from a single sponsored post on Instagram. Meanwhile, he has had a very rocky life as he had faced legal issues in the past. But this didn't stop him from reaching success in his career.