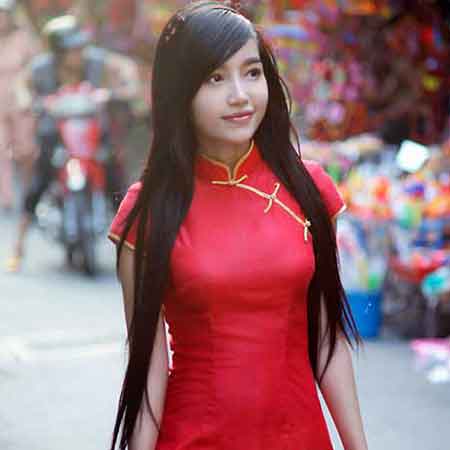 Elly Tran Ha is a famous American-Vietnamese model and actress who gained fame after her bold clad photos circulated through the internet. Elly is often referred to as the Bad Girl of Vietnamese Show Biz and has appeared in many Asian films like Ghost School, Pearls, and Upstream Aspirations, to name a few.

According to a source, Elly and her family relocated to the United States when she was a child.

The same site cited that she found it really hard growing up in an environment that was completely different from the one that she was born in. In addition to that, her body showed signs of development faster than that of other teens, which made her retract from social life.

Although Elly attended school and has completed her graduation. She, however, has not revealed the institution which she attended.

After her graduation, Elly wanted to study acting, but couldn't do so as her parents opposed.

She was forced to attend the Tourism Department, where her father worked.

Later in her teens, Elly moved to Vietnam, where the entertainment business was stormed by singer Thuy Top who was similar to Elly in context to bodily features. Inspired by the singer Elly started uploading pictures of her on the internet, especially Instagram, which gained her immense recognition.

By 2013, she was the most searched name in South Korea, due to which she was offered several modeling contracts, making her one of the popular models in Asia.

Apart from modeling, Elly Tran Ha has also done several acting works. She debuted in the entertainment industry with That Sounds Good, a Thai film released in 2010. She portrayed the lead role in the film Ghost at School (2011), where she played the role of Nana Ly.

Following her major debut, she was offered several other films in 2012 like Blue Daisies, Single Girls Make a Mother and Kitchen Lady. For her outstanding performance, she was awarded the Golden Kite Award in the category of Best Actress.

Since 2012 she has not been seen in any significant movies. The same year she appeared in the launch and promotional event of the video game RAN Return which was held in Indonesia.

How Rich Is Vietnamese Model Elly Tran Ha? Net Worth

Elly Tran Ha has an estimated net worth of $1 million as of 2020, which she amassed from her career chiefly as a model and also as a part-time actress.

Her presence on social media sites has also added to her wealth as she promotes several prestigious brands. A source reported that she makes $147.75 to $246.25 per sponsored post. She has an average engagement rate of 1.72%.

As per her growing popularity, the figures in her net worth are likely to improve in the coming years.

Elly Tran Ha Is A Mother Of Two

Elly Tran Ha is a married woman. She is married to her longtime boyfriend. However, the name of her husband is yet to be out.

The 32 years old is a mother of two children; a girl and a boy who she shares with her boyfriend turned husband.

The couple exchanged their marital vows on 8th May 2017, which she exclusively announced via her Instagram account.

During the peak of her popularity, many alleged questions were raised against Elly Tran in regard to the authenticity b****s. Many claims that her photos were mostly computer edits and that she had implants.

However, the accusations were put to rest by her model friend, Tra Ngoc Hang, who claimed that they had lived for a couple of years in the past and that she hadn't had any implants and her body was all real.