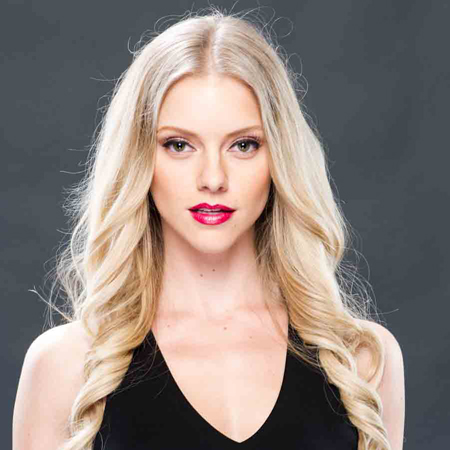 American model and actress, Elle Evans, is popular for her appearance in the controversial music video, Blurred Lines. She is also one of the brand ambassadors of NYX Cosmetics.

Evans was crowned Miss Louisiana Teen USA in 2008 and was the third runner-up in the Miss Teen USA 2008 pageant. However, both of her titles were confiscated when she was arrested for marijuana possession and dine-and-dash with her three colleagues.

Elle Evans was born Lindsey Gayle Evans on 9th December 1989, in Paris, Texas, United States. She is American and belongs to white-American ethnicity.

At the age of 19, Evans appeared in Playboy as Playmate of the Month in October 2009. The photograph was taken by American professional photographer, Stephen Wayda.

The next year, Evans featured in her first commercial in MMG. She also shot for Elite Model Management and Wilhelmina Models in Miami, Florida.

The following year, Evans featured in Relapse Magazine and worked with Photo Annual Issue. She starred in the commercial of AXE Apollo Cologne that aired on MTV Movie Awards 2013.

Evans has modeled for American cinematographer, Samuel Bayer. She has shot a video for Bayer's exhibition "Diptychs & Triptychs" along with 15 other models.

In 2014, Evans made her guest appearance as Cheyenne in American television sitcom, Two and a Half Men. Later in September, Evans was featured in an issue of Maxim, where she was painted gold from head to toe.

In 2015, Evans was cast for the Muse band's single, "Mercy." The video was directed by Sing J Lee and was released in June.

Shortly after, Evans appeared as Amber in 2015 American zombie horror comedy film, Scouts Guide to the Zombie Apocalypse, directed by Christopher Landon. She was also in the horror-thriller film The Love Witch.

Elle Evans is unmarried and has no children. She got engaged to her boyfriend Matt Bellamy in December 2017, after dating for two years.

Matt Bellamy is an English musician, singer, as well as a songwriter. Bellamy is best known as the frontman, guitarist, pianist & principal songwriter of rock band Muse.

Previously, Evans was also in a romantic relationship with Canadian record producer, Deadmau5 in 2010. However, they broke up after a year.

Evans earns a handsome amount of salary from her profession as a successful model, her net worth is close to $2 million as per some online sources. However, no official confirmation has come about it.

Evans was Miss Louisiana Teen USA in 2008 and was also third runner-up in the Miss Teen USA 2008 pageant.

The average salary for a model in the US is $97,257 per year which is considered as the highest salary for models compared to other countries. Elle Evans is also an American model, her salary is also close to that amount.